Skip to content
CBDT has notified New Income Tax return forms for AY 2015-16 vide notification  49/2015 dated 22.06.2015.The original forms were released on 15-04-2015 and revised forms has been issued after two months .No major changes has been made in revised forms and more or less they are similar to Form issued for AY 2014-15.However few changes which have been introduced earlier this year has been twisted and a new form ITR-2A has been introduced. 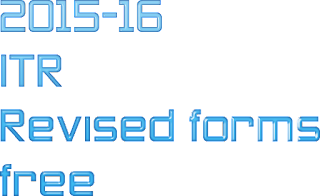 5) An individual who is not an Indian citizen and is in India on a business, employment or student visa (expatriate), would not mandatory be required to report the foreign assets acquired by him during the previous years in which he was non-resident if no income is derived from such assets during the relevant previous year.