The author and his team rates this Union Budget as 7.5 out of 10 after considering the developments and
acceleration in the macro factors, the fiscal discipline, 9 point agenda, challenges before the Finance
Minister, long terms vision and current situation of the Indian Economy.
Positive Features: There are some positive indication/ proposal such as, Acceleration in the Growth of
economy in 2015-16, Increase in foreign exchange reserves, Agriculture and Farmers welfare, Investment in
social sector and health care sector, Education skills and job creation in India, skill development,
infrastructure development, financial sector reforms, governance and ease of doing business, promoting
affordable housing, simplification and rationalization of taxes, transparent procurement procedure
proposed.
Drawback: However, some of the expectations have been left high and dry, such as no transparency in the
track record of implementation, still no reforms for Banking Sector NPA, no such relief to the middle class
society, no commitments for GST implementation, triple taxation on Dividend.

– Growth of Economy accelerated to 7.6% in 2015-16.
– Foreign exchange reserves touched highest ever level of about 350 billion US dollars.
– Continue with the ongoing reform programme and ensure passage of the Goods and Service Tax bill and
Insolvency and Bankruptcy law.
– Giving a statutory backing to AADHAR platform to ensure benefits reach the deserving.
– Allocation for Agriculture and Farmers’ welfare is Rs. 35,984 crore.
– Implementation of 89 irrigation projects under AIBP, which are languishing for a long time, will be fast
tracked.
– A dedicated Long Term Irrigation Fund will be created in NABARD with an initial corpus of about Rs. 20,000
crore.
– 5 lakh farm ponds and dug wells in rain fed areas and 10 lakh compost pits for production of organic
manure will be taken up under MGNREGA.
– Soil Health Card scheme will cover all 14 crore farm holdings by March 2017.
– Allocation under Pradhan Mantri Gram Sadak Yojana increased to Rs. 19,000 crore. Will connect remaining
65,000 eligible habitations by 2019.
– Allocation for rural sector Rs. 87,765 crore.
– Rs. 2.87 lakh crore will be given as Grant in Aid to Gram Panchayats and Municipalities as per the
recommendations of the 14th Finance Commission.
– 100% village electrification by 1st May, 2018.
– Allocation for social sector including education and health care Rs. 1,51,581 crore.
– “Stand Up India Scheme” to facilitate at least two projects per bank branch. This will benefit at least 2.5
lakh entrepreneurs.
– 62 new Navodaya Vidyalayas will be opened.
– Digital Depository for School Leaving Certificates, College Degrees, Academic Awards and Mark sheets to be
set-up.
– 1500 Multi Skill Training Institutes to be set-up. National Board for Skill Development Certification to be
setup in partnership with the industry and academia.
– Deduction under Section 80JJAA of the Income Tax Act will be available to all assesses who are subject to
statutory audit under the Act.
– 100 Model Career Centres to operational by the end of 2016-17 under National Career Service.
– Total investment in the road sector, including PMGSY allocation, would be Rs. 97,000 crore during 2016-17.
Allocation of Rs. 55,000 crore in the Budget for Roads. Additional Rs. 15,000 crore to be raised by NHAI
through bonds. Total outlay for infrastructure Rs. 2,21,246 crore.
– 100% FDI to be allowed through FIPB route in marketing of food products produced and manufactured in
India.
– Allocation of Rs. 25,000 crore towards re capitalization of Public Sector Banks.
– Bill for Targeted Delivery of Financial and Other Subsidies, Benefits and Services by using the Aadhar
framework to be introduced.
– Fiscal deficit in RE 2015-16 and BE 2016-17 retained at 3.9% and 3.5%.
– Revenue Deficit target from 2.8% to 2.5% in RE 2015-16.
– Withdrawal up to 40% of the corpus at the time of retirement to be tax exempt in the case of National
Pension Scheme (NPS). Annuity fund which goes to legal heir will not be taxable.
– 100% deduction for profits to an undertaking in housing project for flats up to 30 sq. metres in four metro
cities and 60 sq. metres in other cities approved during June 2016 to March 2019 and completed in three
years. MAT to apply.
– Committed to providing a stable and predictable taxation regime and reduce black money.

– High Level Committee chaired by Revenue Secretary to oversee fresh cases where assessing officer applies
the retrospective amendment.
– 13 cesses, levied by various Ministries in which revenue collection is less than Rs. 50 crore in a year to be
abolished. 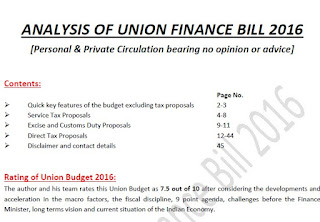 – Expansion in the scope of e-assessments to all assessees in 7 mega cities in the coming years.
– ‘e-Sahyog’ to be expanded to reduce compliance cost, especially for small taxpayers.
– Surcharge to be raised from 12% to 15% for persons other than company, firms and co-operative societies
having income above Rs. 1 Crore.
– No change in tax rates for individuals, co-operative societies, firms, local authorities and companies.
– 10% rate of tax on income from patent developed and registered in India by a resident.
– Extend the presumptive taxation limit for business to 2 crore and coverage of professionals under
presumptive taxation u/s 44AD.