Amid huge expectations and challenges facing the economy, the Hon’ble Finance Minister Shri Arun Jaitley has presented his 1st Full-year Union Budget for the year 2015-16 on 28th February, 2015. In his Budget Speech, he has proposed to increase the effective rate of service tax from 12.36% to 14%. This proposal has created doubts in the minds of some assessee’s and professionals as well. The objective of this article is to identify various issues/queries relating to proposed rate of service tax and try to clarify the same in simple language. To begin with, I quote the relevant Clause 121 of the Budget Speech as below:-

“121. Introduction of GST is eagerly awaited by Trade and Industry. To facilitate a smooth transition to levy of tax on services by both the Centre and the States, it is proposed to increase the present rate of service tax plus education cesses from 12.36% to a consolidated rate of 14%.” 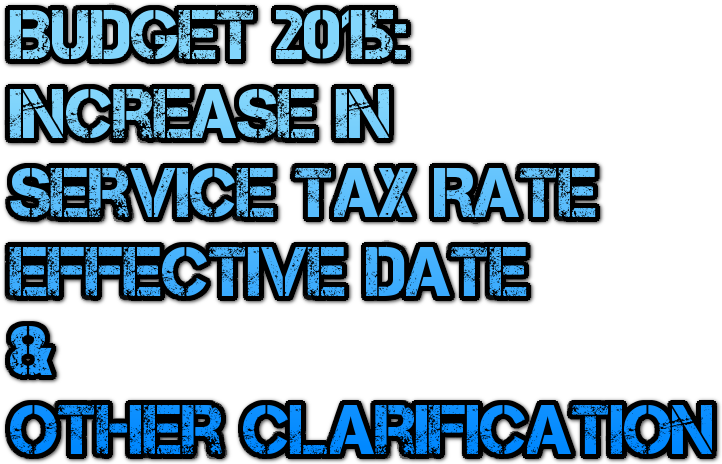 1. Do I have to charge new rate of service tax from 01-03-2015 onwards like we do in case of changes in rates of central excise?

2. Whether the new enhanced rate of service tax going to be effective from 1st April, 2015?

No, the proposed service tax rate will not become effective from 01-04-2015. Many service providers and receivers are having the misconception that any change in rate of service tax takes effect from 1st April of the year. It shall come into effect from a date to be appointed by the Central Government, by way of notification in the Official Gazette, AFTER the enactment of the Finance Bill, 2015. The proposed amendments vide Clause 106 of the Finance Bill, 2015 is quoted as below:-

“106. In section 66B of the 1994 Act, with effect from such date as the Central Government may, by notification in the Official Gazette, appoint, for the words “twelve per cent.”, the words “fourteen per cent.” shall be substituted.”

“3.3 The new Service Tax rate shall come into effect from a date to be notified by the Central Government after the enactment of the Finance Bill, 2015.”

It means, that the new service tax rate cannot come into force before the Finance Bill, 2015 get assent
from the President of India, after which the government will notify the effective date.

3. The Finance Minister’s Budget Speech clearly state that it is proposed to increase the present rate of service tax plus education cesses from 12.36% to a consolidated rate of 14% (as quoted above). Does it mean that once enacted, there won’t be any requirement of charging additional Education Cess of 2% and Secondary Higher Education Cess of 1% over service tax of 14%?

Yes, once the new rate is effective, there won’t be any requirement of charging 3% education cesses on the service tax.

No, there is no break-up of 14% tax rate which entirely constitute of service tax. The 14% rate has been proposed by substituting 12% in the charging section 66B of the Finance Act, 1994 and being statutory rate, it can’t include any other tax/cess within.

5. Ok, now it’s clear that 14% is the FINAL effective rate of service tax from the date to be notified by the Central Government?

6. What is Swachh Bharat Cess (SBC) and how is that related to service tax?

An enabling provision is being incorporated in the Finance Bill, 2015 (Chapter VI/clause 117) to empower the Central Government to impose a Swachh Bharat Cess on ALL or ANY of the taxable services at a rate of 2% on the value of such taxable services. This cess shall be levied from such date as may be notified by the Central Government after the enactment of the Finance Bill, 2015. The details of coverage of this Cess would be notified in due course.

7. OMG!!! It means that the levy of education cesses has been removed and replaced by 2% cess on service tax to be named as Swachh Bharat Cess making the effective rate of service tax at 14.28%?

No, it is wrong to say that the levy of education cesses has been removed and replaced by SBC @ 2% on service tax. I quote below the proposed levy of SBC vide Clause 117(2) of Bill:-

“(2) There shall be levied and collected in accordance with the provisions of this Chapter, a cess to be called the Swachh Bharat Cess, as service tax on all or any of the taxable services at the rate of two per cent on the value of such services for the purposes of financing and promoting Swachh Bharat initiatives or for any other purpose relating thereto.”

The new provision clearly says that the new levy of SBC shall be as service tax @ 2% on the VALUE of such services. So, unlike education cesses, which were levied not on value of services but on service tax thereon, SBC is not a tax on service tax. A cess should not be confused with surcharge which is always a tax on tax.

In the Indian context, the Hon’ble Supreme Court, in a ruling in Shinde Brothers Vs. Commissioner, Raichur reported in 1967, said that ‘‘the word cess means a tax and is generally used when the levy is for some special administrative expense’’ citing various examples suggesting the name of the cess explains the object. Thus, cess is a tax which can be collected in any manner but to be utilized only for purposes specified at the time of levy.

Therefore, if the proposed Swachh Bharat Cess is implemented, the Final effective rate of service tax shall be 16% on notified taxable services.

8. Whether SBC will be made applicable on all the services?

The Central Government is empowered to issue a notification after the enactment of the Finance Bill, 2015 to impose the new levy on either all the taxable services or on specified services. If selected services are subjected to the new levy of SBC, the issue of classification of service arise which is expected to generate more disputes, litigations and controversies, as has been seen in the past. The effective date of applicability of SBC shall be notified by the government.

Disclaimer: This article is the property of the author. No one shall publish, reproduce or use it in any manner, for commercial purposes, without the permission of the author. The author shall not be responsible or liable for anything done or omitted to be done on the basis of this article.