INTRODUCTION
The Finance Bill, 2015 proposes to make amendments in direct tax provisions by proposing amendments to the Income-tax Act, 1961, Wealth-tax Act, 1957, Finance Act, 1994 and Finance (No.2) Act, 2004.  A gist of the main amendments is given below:- 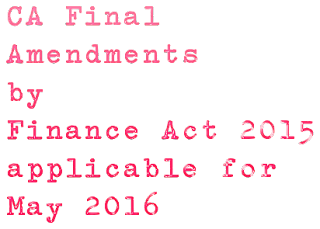 Direct Taxes
2.         Rates of tax
2.1       It is proposed that there will be no change in the rate of personal income-tax and the rate of tax for companies in respect of income earned in the financial year 2015-16, assessable in the assessment year 2016-17.
2.2       It is further proposed to levy a surcharge @12% on individuals, HUFs, AOPs, BOIs, artificial juridical persons, firms, cooperative societies and local authorities having income exceeding ` 1 crore.  Surcharge in the case of domestic companies having income exceeding ` 1 crore and upto ` 10 crore is proposed to be  levied @ 7% and surcharge @ 12% is proposed to be levied on domestic companies having income exceeding Rs. 10 crore.
2.3       It is further proposed that in the case of foreign companies the surcharge will continue to be levied @2% if the income exceeds ` 1 crore and is upto ` 10 crore, and @5% if the income exceeds Rs.  10 crore.
2.4       It is also proposed to levy a surcharge @12% as against current rate of 10% on additional income-tax payable by companies on distribution of dividends and buyback of shares, or by mutual funds and securitisation trusts on distribution of income.
2.5       The education cess on income-tax @ 2% for fulfilment of the commitment of the Government to provide and finance universalised quality based education and 1% of additional surcharge called ‘Secondary and  Higher Education Cess’ on tax and surcharge is proposed to be continued for the financial year 2015-16 for all taxpayers.

3.         A. Measures to curb black money
3.1       With a view to curbing the generation of black money in real estate, it is proposed to amend the provisions of section 269SS and 269T of the Income-tax Act so as to prohibit acceptance or re-payment of advance in cash of ` 20,000 or more for any transaction in immovable property.  It is also proposed to provide a penalty of an equal amount in case of contravention of such provisions.
3.2       Offence of making false declaration/documents in the transaction of any business relating to Customs (section 132 of the Customs Act) to be predicate offence under PMLA to curb trade based money laundering.

4.         B.  Job creation through revival of growth and investment and promotion of domestic ‘manufacturing’ and ‘Make in India’.
4.1       Taking into account the representations received from various stakeholders and international developments in this regard, it is proposed to defer applicability of General Anti Avoidance Rule (GAAR) by 2 years.  Accordingly, it is proposed to be applicable for income of the financial year 2017-18 (A.Y. 2018-19) and subsequent years.  It is also proposed that the investments made upto 31.03.2017 shall not be subjected to GAAR.
4.2       With a view to streamline the taxation regime of Alternative Investment Funds (AIFs), it is proposed to provide pass through status to all the sub-categories of category-I and also to category-II AIFs governed by the regulations of Securities and Exchange Board of India (SEBI).
4.3       With a view to facilitate relocation of fund managers of offshore funds in India, it is proposed to modify the permanent establishment (PE) norms.
4.4       With a view to give effect to the provisions of section 94 of the Andhra Pradesh Reorganisation Act, 2014, it is proposed to provide an additional investment allowance (@15%) and additional depreciation (@15%) to new manufacturing units set-up during the period 01.04.2015 to 31.03.2020 in notified areas of Andhra Pradesh and Telangana.
4.5       In respect of Real Estate Investment Trusts (REITs) and Infrastructure Investment Trusts (INViTs), it is proposed to provide that the sponsor will be given the same treatment on offloading of units at the time of listing as would have been available to him if he had offloaded his shareholding of special purpose vehicle (SPV) at the stage of direct listing.  Further, the rental income arising from real estate assets directly held by the REIT is also proposed to be allowed to pass through and to be taxed in the hands of the unit holders of the REIT.
4.6       It is proposed to amend the provisions of section 194LD of the Income-tax Act so as to extend the period of applicability of reduced rate of tax at 5% in respect of income of foreign investors (FIIs and QFIs) from corporate bonds and government securities, from 31.5.2015 to 30.06.2017.
4.7       With a view to obviate the problems faced by small companies and to facilitate the inflow of technology, it is proposed to amend the provisions of section 115A of the Income-tax Act so as to reduce the rate of tax on royalty and fees for technical services from 25% to 10%.
4.8       With a view to facilitating generation of employment, it is proposed to amend the provisions of section 80JJAA of the Income-tax Act so as to provide that tax benefit under the said section shall be available to a ‘person’ deriving profits from manufacture of goods in a factory and paying wages to new regular workmen. The eligibility threshold of minimum 100 workmen is proposed is to reduced to fifty.
4.9       Additional depreciation @ 20% is allowed on new plant and machinery installed by a manufacturing unit or a unit engaged in generation and distribution of power.  However, if the asset is installed after 30th September of the previous year only 10% of the additional depreciation is allowed.  It is proposed to allow the remaining 10% of the additional depreciation in the subsequent previous year.

6.         D.  Improving the quality of life and public health through Swachh Bharat Initiatives
6.1       It is proposed to provide that the donations (other than the CSR contributions made in accordance with section 135 of the Companies Act, 2013) made to Swachch Bharat Kosh (by both resident and non-resident) and Clean Ganga Fund (by resident) shall be eligible for 100% deduction under section 80G of the Income-tax Act.

8.         F.   Stand alone proposals to maximise benefits to the economy
8.1       It is proposed to provide for chargeability of interest paid by a permanent establishment (PE) or a branch of foreign bank to its Head Office (HO) and other overseas branches under the source rule of taxation and for treating the PE or branch as a taxable entity for computation of income and for purpose of levy of TDS.
8.2       With a view to providing a uniform method of computation of period of stay in Indian for the purposes of determination of ‘resident’ status in the case of a India seafarer, whether working on a Indian-ship or foreign-ship, it is proposed to provide an enabling power to CBDT to prescribe the same in the rules.
8.3       In search cases, it is proposed to allow seized cash to be adjusted towards the assessee’s tax liability under his settlement application.
8.4       With a view to ensuring proper deduction of tax on payments made to non-residents, it is proposed to amend the provisions of section 195 of the Income-tax Act so as to provide for enabling power to the CBDT for capturing information about prescribed foreign remittances which are claimed to be not chargeable to tax.