Skip to content
S.No Case Explanation 1 ITO vs. Ch. Atchaiah (Supreme Court) Income of AOP has to be taxed in the hands of AOP only and the members of AOP cannot be taxed individually.

7 Jagapathy Art pictures vs CIT Film subsidy granted after the film was certified by censor. (revenue in nature)

9 CIT vs Ponni Sugars & Chemicals Ltd. Grants given to set up new units and for expansion of old units.

10 CIT vs central India industries ltd (SC) Income received by an assesse need not be in the form of cash only. It may also be some other property or right which has monetary value.

11 CIT vs Raasi Cement ltd. (2013) 351 ITR 169 (A.P) Power subsidy received by the assesse on the basis of actual power consumption is to be treated as trading receipt.

13 CIT vs Saurashhra Cement Ltd. (2010) 325 ITR 422 (SC) Liquidated damages received by a co from the supplier of plant for failure to supply machinery is a capital receipt.

14 CIT v jagarjit Industries ltd (2011) 337 ITR 21 (Delhi) Share price raised in foreign company and repatriated to IIndia on need basis for approved uses, the gain arising on the balance sheet date due to fluctuation in foreign exchange the part of share upt used as working cpt should be treated as capital receipt.

15 CIT vs. Rasoi ltd (2011) 335 ITR 213B (Cal) Subsidy from govt. under the scheme of industrial promotion for expansion of its capacities, modernization and improving its capabilities, (capital receipt in nature) 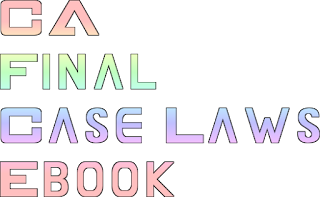 17 CIT vs Groz Beckert Asia Ltd. (2013) 351 ITR 196 (P & H) Corporate membership fees cannot be treated as capital in nature as such fee doesn’t bring into existence an asset or an advantage for enduring benefits.

18 CIT vs Kinetic capital finance ltd 2002 (Taxman) 548 (Bd) Onus is placed on assesse to disclose identity of creditor, but not required to prove genuineness of transaction between creditors.

19 CIT vs Softworks computers P ltd. (2013) 354 ITR 16 (Bom) Waivers of loan or advance taken for the purpose of relocation of office premises be treated as capital receipt not liable to tax.

20 CIT V Handicrafts & Handlooms Export corporation of India Ltd. (2014) 360 ITR 0130 (Delhi) Grant received by a subsidiary co from its holding co. to recoup it’s the losses incurred & enable to meet its liabilities is of capital in nature to protect its investment (Subsidiary).

23 Aditya Birla Nuvo ltd vs DDIT (international taxation) (2011) (Bom) On sale of shares to Indian IV Parameters, gain accrued in India would give rise to tax liability in the hands of us co and not in the hands of Mauritius co (Subsidy Co)

24 Trinity Corporation 295 ITR 258 (AAR) Any Capital gain earned by a person by transfer of any capital asset situated in India is deemed to accrue or arise in India.

25 CIT vs Cli Lilly & Co (India Pvt Ltd) (2004) (312 (ITR) 225 (SC) Payment of home salary abroad by foreign co to the expantriate for vendition of service in India, then such payment would constitute income deemed to accrue or arise in India.

26 Bharti Axa General Insurance Co Limited In (2010) (AAR) Payment made by Indian insurance co to Singapore Co. for providing access to applications and serve hardware system hosted in Singapore is not in nature of Royalty.

27 Asia Satellite telecommunications Co ltd vs. DIT (2011) (Dct) Won Resident TV Channel uplinks TV programme to satellite through their own facilities situated outside India & Satellites which are not stationed over Indian Airspace & Indian cable operator receives the signals, merely co2 of footprints area of satellite transponders it would not mean that satellite owner are carrying out its buss. Operations in India. Such amounts is not royalty as defined in explanation 2 to 9(I)(VI).

28 CIT vs Poddar Cements (SC) Registration of sale deed is not mandatory to regard as owner. 29 Puttanna Sons (P) Ltd us CIT 162 ITR 468 (Kar) Ownership need not extend to site. Owner of building sufficient.