Skip to content
While one endeavors to derive income, the possibility of incurring losses cannot be ruled out. Based on the principles of natural justice, a set-off should be available for loss incurred. The income tax laws in India recognise this and provide for adjustment and utilisation of the losses. However, there are conditions which have been introduced to prevent misuse of such provisions.

To the common taxpayer, income tax is a crunch into the income earned. Accordingly, awareness of the relevant provisions pertaining to set off and carry forward of losses is essential in order to maximize tax benefits. The relevant provisions have been summarised here:
A) Set off of loss under the same head of income.(section 70) (Intra-head set off)
Income of a person is computed under five heads. ‘Sources’ of income derived by an individual may be many but yet they could be classified under the same head. For instance, an individual may have a dual employment, yet the income would be classified under the head ‘Salaries’. However, given the mechanism of computing taxable salary income, it would be safe to say that an individual cannot incur losses under this head of income.

Consider a situation where Harsh has two properties – one, occupied by him and the other, let out. Harsh pays interest on loan of Rs 1.50 lakh on the property occupied and derives net rental income of Rs 1.50 lakh from the let-out property. In case of a self-occupied property, income is computed as nil and interest expenditure results in loss. The loss of Rs 1.50 lakh can be set off against rent income of Rs 1.50 lakh; the income chargeable under the head ‘House property’ will be ‘Nil’.
An exception to intra head set off is loss under the head ‘Capital gains’, which may arise from transfer of any capital asset. Long-term capital loss arises from transfer of shares or units where holding period is more than 12 months and in respect of other assets holding period is more than 36 months prior to sale. Transfer of assets held for less than prescribed period results in short-term capital loss. Long-term capital loss cannot be set off against short-term capital gains.
Further, loss incurred from speculation loss (eg. from shares or commodities) cannot be set off against any other income. 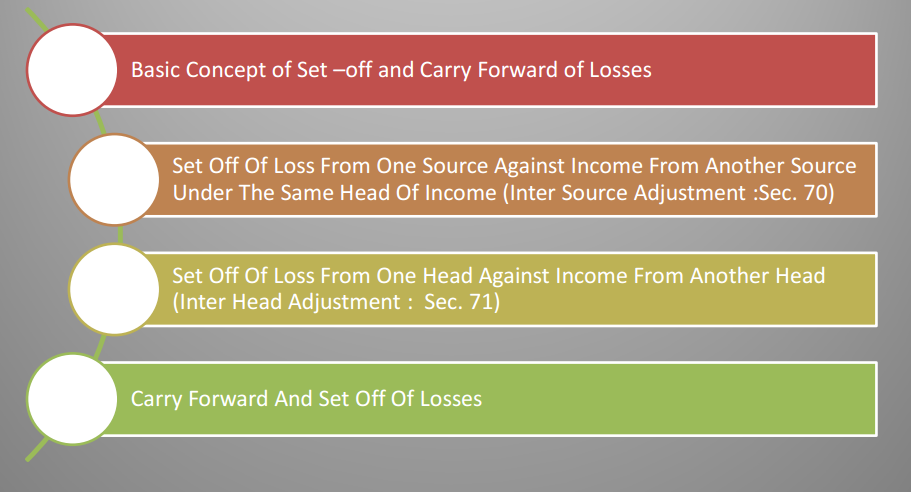 TO KNOW MORE ABOUT CLICK HERE TO GET PDF FILE