Skip to content
Significant Notifications and Circulars of central excise issued between 1st May, 2015 and 31st October, 2015

1. No refund of CENVAT credit under rule 5B to service providers providing manpower supply/ security services

Rule 5B of the CENVAT Credit Rules, 2004 provides that service providers, rendering notified reverse charge services, being unable to utilise the CENVAT credit availed on inputs and input services for payment of service tax on such output services, shall be allowed refund of such un-utilised CENVAT credit. In this regard, earlier following partial reverse charge services were notified:

(i) renting of a motor vehicle designed to carry passengers on non-abated value, to any person who is not engaged in a similar business;
(ii) supply of manpower for any purpose or security services; or (iii)
(iii) service portion in the execution of a works contract Since with effect from 01.04.2015, service tax with respect to supply of manpower for any purpose or security services is payable on the basis full reverse charge, service providers of said services will no longer be eligible for refund of CENVAT credit availed on inputs and input services for payment of service tax on such output services. Further, application in Form A for claiming refund has also been suitably modified. The aforesaid amendment is effective from April 01, 2015. [Notification No. 15/2015 CE (NT) dated 19.05.2015]

2. Reversal of credit under rule 6 not required in case of ethanol produced from molasses generated from cane crushed in the sugar season 2015-16 [Clause (ix) inserted to rule 6(6) of the CENVAT Credit Rules, 2004]

In case of such removal, though ethanol is removed without payment of duty, CENVAT credit on inputs/capital goods/input services used in the manufacture of ethanol can be availed. Further, where common inputs/input services are used to manufacture ethanol and other dutiable final product, reversal of credit or payment of amount on removal of ethanol will not be required.

(i) credit of EC and SHEC paid on inputs/ capital goods received in the premises of the output service provider on or after 01.06.2015;

(ii) credit of balance 50% EC and SHEC paid on capital goods received in the premises of the output service provider in the financial year 2014-15; and

(iii) credit of EC and SHEC paid on input service in respect of which the invoice, bill, challan or Service Tax Certificate for Transportation of Goods by Rail (referred to in rule 9), as the case may be, is received by the output service provider on/ after 01.06.2015.

Every manufacturing unit engaged in the manufacture of aluminium roofing panels* has been exempted from obtaining the central excise registration, subject to fulfillment of the following conditions: 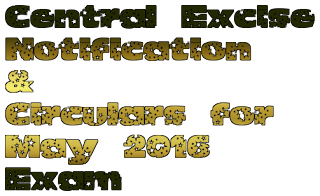 Rule 10(4) and rule 11(8) of the Central Excise Rules, 2002 provide for authentication of every page of excise records preserved in electronic form and of invoices respectively, by means of digital signatures. Further, rule 10(5) and rule 11(9) have authorized CBEC to notify the conditions, safeguards and procedure to be followed by an assessee for preserving digitally signed records and issuing digitally signed invoices.

In this regard, the following conditions, safeguards and procedure have been prescribed vide Notification No. 18/2015 CE (NT) dated 06.07.2015:

(a) Every assessee proposing to use digital signature shall use Class 2* or Class 3** Digital Signature Certificate duly issued by the Certifying Authority in India. *Class 2 Certificate: These certificates are issued for both business personnel and private individuals use and are available for download after verifying a person’s identity against a trusted and pre-verified database. **Class 3 Certificate: This certificate is issued to individuals as well as organizations. Since these are high assurance certificates, primarily intended for e-commerce applications, they shall be issued to individuals only on their personal (physical) appearance before the Certifying Authorities.
(b) Every assessee proposing to use digital signatures shall intimate the following details to the jurisdictional Deputy/ Assistant Commissioner of Central Excise, at least 15 days in advance:

Note: The above conditions will also apply in case of preservation of service tax records in electronic form and authentication of service tax invoices by digital signatures. Further, all importers and exporters using services of Customs Brokers for formalities under Customs Act, 1962, shipping lines and air lines have also been required to file customs documents under digital signature certificates mandatorily with effect from 01.01.2016. The importers/ exporters desirous of filing Bill of Entry or Shipping Bill individually may however have the option of filing declarations/ documents without using digital signature [Circular No. 26/2015 Cus. dated 23.10.2015].

6. Exemption from sealing in a package/ container to export of bulk cargo [for e.g. coal, iron-ore, alumina concentrate, heavy machinery etc.] which is difficult to seal in packages/container

The conditions and procedure relating to export (under bond) without payment of duty to all countries except Bhutan are contained in Notification No. 42/2001 CE (NT) dated 26.06.2001 issued under rule 19 of the Central Excise Rules, 2002. The said notification stipulates that before clearing the export consignments from the factory/ warehouse/ any other approved premises, goods needs to be sealed-either by Central Excise Officer after examination of such goods or by the exporter himself under self-sealing and self certification. However, bulk cargo e.g. coal, iron-ore, alumina concentrate, heavy machinery etc. are difficult to seal in packages or container. Consequently, Notification No. 23 /2015 CE (NT) dated 30.10.2015 has been issued which provides that where the nature of goods is such that the goods cannot be sealed in a package or a container such as coal or ore, etc., exemption from sealing of package or container may be granted by the Principal Chief Commissioner/ Chief Commissioner of Central Excise subject to safeguard as may be specified by him in the permission.