Skip to content
Role of Company Secretary in Employment and in Practice. Company Secretary is a key functionary in the corporate pyramid. With increasing emphasis on the principles of good governance and on compliances, responsibilities of Company secretary have increased manifolds towards safeguarding the interests of all stakeholders.

The Companies Act, 2013 has enhanced the role of company secretary substantially, both in employment and in practice.
Company Secretary in Employment A Key Managerial Personnel (KMP)
The Companies Act, 2013 Act confers a special status to Company Secretary as the key managerial personnel and has bracketed him along with Managing Director (MD) or Chief Executive Officer (CEO) or Manager, Whole-time director(s) or Chief Financial Officer (CFO).
Every listed company and every other public company having a paid up share capital often crore rupees or more has to appoint a whole time Key Managerial Personnel.
The appointment of whole time KMP has to be made by a Board resolution, which is a testimony of the significance of the role of Company secretary as KMP Registrar of Companies must be notified of the appointment together with any change of details or the termination of the appointment.

Role of Company Secretary | Fact Sheet
Appointment as CS in other Companies
Whole time Company Secretary is also required to be appointed in other companies which have a paid up share capital of five crore rupees or more.
In short,a company secretary is to be appointed in following companies:
a) private company whose paid up capital is ? 5 crores and above
b) public company whose paid up capital is above ? 5 crores upto ?10 crores
c) public company whose paid up capital is above ? 10 crores- cs to be appointed as KMP as mentioned above.
Qualifications
In accordance with Company Secretaries Act, 1980 a “Company Secretary” means a person who is a member of the Institute of Company Secretaries of India.
Functions and Duties
Other than the traditional roles, the Companies Act, 2013 (Act) codifies the functions and duties of Company Secretary:
• reporting to the Board about compliance with the provisions of the Act, the rules made there under and other laws applicable to the company.
• ensuring that the company complies with the applicable secretarial standards issued by Institute of Company Secretaries of India and approved by Central Government.
• providing to the directors of the company, collectively and individually, such guidance as they may require, with regard to their duties, responsibilities and powers;
• facilitating the convening of meetings and attending Board, committee and general meetings and maintaining the minutes of these meetings;
• obtaining approvals from the Board, general meeting, the government and such other authorities as required under the provisions of the Act;
• representing before various regulators, and other authorities under the Act in connection with discharge of various duties under the Act;
• assisting the Board in the conduct of the affairs of the company;
• assisting and advising the Board in ensuring good corporate governance and in complying with the corporate governance requirements and best practices; and
• discharging such other duties as have been specified under the Act or rules;
Report on Annual General Meeting
Every listed public company is required to prepare a report on each annual general meeting including the confirmation to the effect that the meeting was convened, held and conducted as per the provisions of this Act and the rules made thereunder. The report is also required to be signed by company secretary of the company;
Additional Duties
The Company Secretary is invariably required to take on a variety of additional administrative duties. Typically, these may include:
• Risk Management
• Communication with various stakeholders, such as shareholders, Government, regulatory Authorities, etc.
• Advising on Company Management
• Advising on business policy, strategy and planning
• Advising on corporate social responsibility
• Advising on sustainability reporting
• Advising on brand equity and image building
• Office management
• Managing Intellectual property rights of the company
Only CS as Compliance Officer in Listed Companies
Under the SEBI (Listing Obligations and Disclosure Requirements) Regulations, 2014 (Listing Regulations), the Company Secretary has to be mandatorily appointed as compliance officer except for units of Mutual Funds listed on Stock Exchanges.
(Yet to be notified. Approved in SEBI Board Meeting vide PR No. 130/2014 dated 19th November, 2014)
Company Secretary in Practice
The Companies Act, 2013, provides wide opportunities to Company Secretaries in practice such as
• Promotion, formation and incorporation of companies and related matters.
• Secretarial Audit and Certification Services.
• Signing of Annual Return.
• Representing on behalf of a company and other persons before National Company LawTribunal.
• Handling Corporate Restructuring and takeover.
• Appointment as a scrutinizer, to scrutinize the e-voting process in a fair and transparent manner.
• Administrator in respect of rehabilitation and revival of sick companies.
• Appointment as Company Liquidator/ Provisional Liquidator.
• May provide Professional assistance to Company Liquidator.
• Can be Technical Member of National Company law Tribunal.
• Can become a part of Mediation & Conciliation Panel consisting of experts having prescribed qualifications for mediation between the parties during the pendency of proceedings before Central Govt./NCLT/NCLAT.
• Serious Fraud Investigation Office to consist of experts from banking, taxation, corporate affairs, law, capital market. Company Secretaries may opt for the same.
• A Company Secretary may become a registered valuer under various provisions of the Act.
• Pre-certification and e-filing of various e- forms.
• Developing a corporate compliance management system and social sustainability framework for a company. 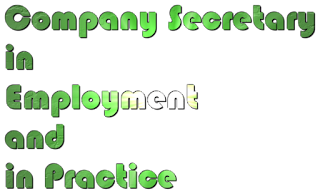 CS as Auditors
Secretarial Audit is certainly a complete expression of faith of the legislature and government on the company secretaries to instil corporate discipline and ensure compliance with laws.
Under Companies Act, 2013 every listed company and
(a) every public company having a paid-up share capital of fifty crore rupees or more; or
(b) every public company having a turnover of two hundred fifty crore rupees ;or more.
is required to annex with its Board’s report a Secretarial Audit Report, given by a company secretary in practice, in form MR.3. This wide scope of Secretarial Audit requires
• Compliance with Companies Act, 2013, Securities Contracts(Regulation) Act, 1956, Depositories Act, 1996, Foreign Exchange Management Act, 1999 Securities and Exchange Board of India Act, 1992
• Compliance of Sector specific laws
• Examining and reporting whether the adequate systems and processes are in place to monitor and ensure compliance with general laws like Labour laws, Competition laws, Environmental laws
Reporting of fraud – In the course of the performance of his duties as secretarial auditor, if company secretary in practice has reason to believe that an offence involving fraud is being or has been committed against the company by officers or employees of the company, he should immediately report the matter to the Central Government.
Annual Return Certification
In respect of all the companies (except one person companies and small companies), the annual return has to be signed by either a company secretary in employment and director or where no Company Secretary is appointed by the company, then by the Company Secretary in practice.
Further, the Company Secretary in practice is required to certify the annual return, filed by a listed company or a company having paid-up share capital of ten crore rupees or more or turnover of fifty crore rupees or more
Pre-Certification Services
A Company Secretary in Practice is authorised for Pre-certification of various e-forms / LLP Forms / DIN certification. This also entails huge responsibility on the professional to ensure compliance of laws.
CS as Registered Valuer
Registered Valuer is one of the new concepts introduced by the Companies Act, 2013 to provide for a proper mechanism for valuation of the various assets and liabilities related to a company and to standardize the procedure thereof. A Company Secretary in Practice is eligible to be a valuer.
CS as an Insolvency Practitioner
Company Secretary has been recognised in the Companies Act as Provisional / Company Liquidator. He may also be appointed as company administrator for the purpose of revival and rehabilitation of companies.
The Companies Act, 2013 reposes enormous responsibilities on both the Companies and the professionals towards compliances of various provisions, in letter and spirit. Simultaneously non-compliance penalties are substantially high.
It is therefore advisable to all Companies to mitigate compliance risks and utilize expert services from Company Secretaries to do so.
Company Secretary – an Expert beyond the Companies Act
In addition to the Companies Act, 2013, a Company Secretary renders his services in the area of various corporate and economic laws, Taxation Laws, Foreign Exchange Management Act, Consumer Protection Act, Depositories Act, Environment and Pollution Control Laws, Labour and Industrial Laws, Co-operative Societies Act.
A gist of the services rendered by Company Secretaries beyond Companies Act is enlisted below:
Public Issue, Listing and Securities Management
• Advisor/consultant in issue of shares and other securities.
• Drafting of prospectus/offer for sale/letter of offer/other documents related to issue of securities and obtaining various approvals.
• Listing/delisting of securities with recognized stock exchange.
• Private placement of shares and other securities.
• Buy-back of shares.
• Raising of funds from international markets ADR/GDR/FCCBs/FCEBs/ ECB.
• Due diligence.
Banking Services
• Diligence Report and Certification in respect of Consortium/Multiple banking arrangement made by Scheduled Commercial Banks/Urban Co-operative Banks.
• Loan Syndication and Documentation, registration of charges, status and search reports.
Takeover Code and Insider Trading
• Ensuring compliance of the Takeover Regulations and other applicable laws and rules.
• Acting as Compliance Officer and ensuring compliance with Prohibition of Insider Trading Regulations.
Securities Compliance and Certification Services
• Certification on compliance of Clause 49 (Corporate Governance) of Listing Agreement.
• Annual Compliance auditor under SEBI (Research Analyst) Regulations, 2014
• Internal Audit of Depository Participants/Portfolio Manager/Stock Brokers.
• Audit in relation to Reconciliation of Shares.
• Certificate in respect of compliance of Private Limited and Unlisted Public Company (Buy Back of Securities) Rules.
• Certification under clause 47(c) (Transfer of Shares) of Listing Agreement.
Finance and Accounting Services
• Determination of appropriate capital structure.
• Analysis of capital investment proposals.
• Budgetary controls.
• Preparation of Project Reports and Feasibility Studies.
Taxation Services
• Advisory services to companies on tax management and tax planning under Income-Tax, Excise and Customs Laws, Services Tax and VAT.
• Preparing/reviewing various Returns and Reports required for compliance with the tax laws and regulations.
International Trade and WTO Services
• Advising on matters related to IPRs under TRIPs Agreement of WTO.
• Advising on matters relating to antidumping, subsidies and countervailing duties.
• Advising on and issuing certificates in respect of Foreign Trade Policy and Procedures.
• Advising on Intellectual Property licensing and drafting of Agreements.
• Acting as registered Trade Marks Agent.
Information Technology
• Compliance with cyber laws.
• Conducting Board Meetings through video-conferencing and teleconferencing.
• Advising on IT related IPR.
• Developing management reports and controls.
Corporate Laws Advisory Services
Advising companies on compliance of legal and procedural aspects, particularly under:
• SEBI Act, SCRA and Rules and Regulations made thereunder Listing Agreement.
• Depositories Act.
• Foreign Exchange Management Act.
• Environmental and Pollution Control Laws.
• Labour and Industrial Laws.
• Co-operative Societies Act.
• Mergers, Amalgamations and Strategic Alliances.
• Foreign Collaborations and Joint Ventures.
• Setting up Joint Venture/Wholly owned subsidiaries abroad.
• Competition Policy and Anti Competitive Practices.
• Intellectual Property Rights – Protection, Management, Valuation and Audit.
• Drafting of Legal Documents.
Representation Services
Representing on behalf of a company/other persons before:
• Company Law Board.
• National Company Law Tribunal (to be constituted).
• Competition Commission of India & Competition Appellate Tribunal.
• Securities Appellate Tribunal.
• Registrar of Companies.
• Conusmer Forums.
• Telecom Disputes Settlement and Appellate Tribunal.
• Tax Authorities, and
• Other Quasi-judicial bodies and Tribunals.
Arbitration and Conciliation Services
• Advising on arbitration, negotiation and conciliation in commercial disputes between parties.
• Acting as Arbitrator/Conciliator in domestic and international commercial disputes.
• Drafting Arbitration/Conciliation Agreement/Clause.