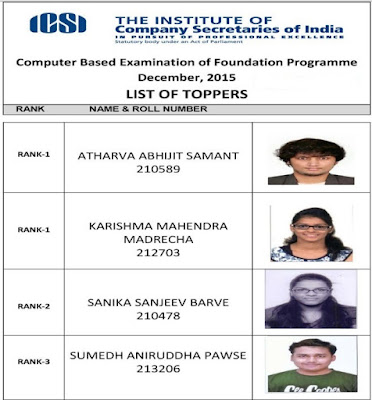 Read: CS Foundation Exam Time Table June 2016
CS Foundation Merit List Toppers Mark Sheets and Photos Dec 2015
Result of Computer Based Examination (CBE) for CS Foundation Programme held in December, 2015 would be declared on Wednesday, the 27th January, 2016 at 11.30 A.M. The result alongwith individual candidate’s subject wise breakup of marks will be available on the Institute’s website:
www.icsi.edu
Candidates may also get their result through e-mail by registering themselves in advance for the purpose on Institute’s website. Formal E-Result-cum-Marks Statement of Foundation Programme examination will be uploaded on the website of Institute www.icsi.edu immediately after declaration of result for downloading by candidates for their reference, use and records.
However, no physical copy of result-cum-marks statement shall be issued.