As rightly said, depreciation is one of most common accounting term and is widely used by students, accountants and corporate. Depreciation is major component of total expenses and more particularly for companies with larger fixed assets base. The term ‘depreciation’ is in existence from years and perhaps no ambiguity has been left to deliberate upon. Then why is it gaining attention and has become the most talked about term, of late? This is because of changes brought under Companies Act, 2013. Number of queries is being raised by accountants and auditors, few of which have been resolved and balance left for wise interpretation. The situation has surfaced perhaps the basic concept on depreciation is being side lined and attempts are being made to reach at the conclusion directly.

Depreciation has been defined as ‘measure of the wearing out, consumption or other loss of value of a depreciable asset arising from use, effluxion of time or obsolescence through technology and market changes’.

Depreciation is allocated so as to charge a fair proportion of the depreciable amount in each accounting period during the expected useful life of the asset. Depreciation includes amortisation of assets whose useful life is predetermined.

Depreciable assets are assets which

(i) are expected to be used during more than one accounting period; and
(ii) have a limited useful life; and

(iii) are held by an enterprise for use in the production or supply of goods and services, for rental to others, or for administrative purposes and not for the purpose of sale in the ordinary course of business. 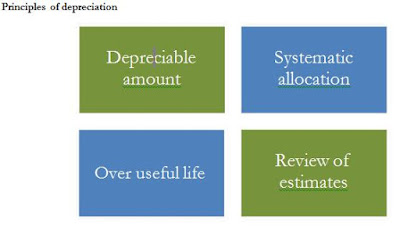 Depreciable amount is the cost of the asset less the expected residual value. Cost of asset includes the base cost and other cost incurred specifically. In other words, it is the capitalisation amount arrived in accordance with the enterprise’s accounting policy. Expected residual value is the estimated scrap value at the end of useful life of the asset.
Systematic allocation refers to method of allocating the depreciation amount over the accounting period. The allocation should reflect the pattern of asset being used by the enterprise. The two most common methods for providing depreciation are the Straight Line Method and the Reducing Balance Method. The selection of method should be after carefully considering nature of the asset and the conditions under which it is being used.
Under Straight Line Method, the depreciable amount is charged off every year equally so as to reduce the cost of the asset to nil or its residual value at the end of it useful life. The underline principle is that the asset generates equal utility over the life of asset.
Under Reducing Balance Method, a fixed percentage of the diminishing value of the asset is written off each year so as to reduce the asset to its break-up value at the end of its life. Under this method, the annual charge of depreciation decreases from year to year. This method takes into cognizance the pattern of repairs and wear-tear.
The depreciable amount needs to be allocated systematically over the asset’s useful life. ‘Useful Life’ is either
(i) the period over which a depreciable asset is expected to be used by the enterprise or (ii) the number of production or similar units expected to be obtained from the use of the asset. Determination of the useful life is a matter of estimation and is normally based on various factors including experience with similar type of assets.
For example, a machine is purchased for INR 100,000. The residual value is estimated at INR 10,000 and the estimated useful life is 5 years. The per year depreciation allocation under straight line method will be:
Depreciation = Depreciable amount / Estimated useful life
INR 90,000/ 5 years = INR 18,000 per year