Skip to content
What is Depreciation?
Depreciation, means a decline in the net value of the assets.  A certain percentage of Fixed asset is charged as  depreciation in the every accounting period by the the business concern for the purpose of knowing the exact value of the asset holding. The another main emphasis of the depreciation process is to match up the expenses with the revenues reported in each period. 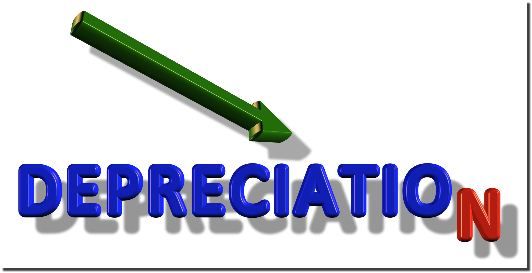 Why Depreciation is Charged?
Let say in example, A machinery is purchased at $100,000 and it is used for 5 years and now if I want to sell the machinery I get only $10,000, Why? Because it been used (Wear and Tear applies).

So If the machinery broke down, I have no funds to repair of purchase a new machinery, I am left with no option except closure of my business. For this reason only, a part of money is charged from the profit in the way of depreciation in the view of any uncertainty or Expiry of machinery.

Depreciation is charged  as an Indirect expense on the end Goods produced.

What are the causes of Depreciation?

Few of the causes of depreciation are.
Physical Deterioration: It is caused mainly from wear and tear when the asset is in use and from erosion, rust, rot, and decay from being exposed to wind, rain, sun and other elements of nature.

Economic Factors:  The problem on Obsolescence and Inadequacy. Obsolescence means the process of becoming obsolete or out dated.  An old machinery though in good physical condition may be rendered obsolete by the introduction of new model which produces more than the old machinery.  Inadequacy refers to the termination of the use of an asset because of growth and changes in the size of the firm.  But obsolescence and inadequacy do not necessarily mean that the asset is scrapped.

Time Factors: There are certain assets with a fixed point of legal life such as lease, patents, and copyrights.  For instance, a lease can be entered into for any period while a patents legal life is for some years but on certain grounds this can be extended.  Provision for the consumption of these assets is called amortization rather than depreciation.

Deletion: Some assets are of wasting characters perhaps due to the extraction of raw materials from them.  These materials are then either used by the firm to make something else or are sold in their raw state to other firms.  Natural resources such as mines, quarries, and old wells come under this heading.  To provide for the consumption of an assets of wasting character is called provision for depletion.

Accident: An asset may reduce in value because of meeting of an accident.