Issues still to be Addressed: Interest payment from India
Though we have discussed so far India Income tax provisions, DTAA provisions and relevant case laws. Let us see the areas where there is no clarity as regards taxability as interest and hence present opportunity for tax planning:

a) Thin Capitalisation: Since interest unlike dividends, is generally allowed to be deducted from the company’s profit before corporation tax and since moreover, taxation of interest in the state of source is more beneficial than that of dividends, it is likely that company will prefer borrowings from shareholders’ to increase its shareholders’ contributions.
Though many countries have passed legislation designed to prevent such devices resulting in tax avoidance and particularly envisaging that interest paid be treated as dividend in cases where there appears to be thin capitalisation or under capitalisation. India is still an exception and presents opportunity to explore such option to reduce tax outflow on dividend and pay interest instead of dividend. In India, payment of dividend is liable for additional tax@18% in addition to corporation tax @ 33% on entire income. However, interest is subject to maximum withholding tax of 20% ( 10%/15% under DTAA).
However, such arrangement shall not be permissible in respect of transactions with countries which DTAAs have already a GAAR clause. Eg. DTAA with Ukraine contains anti abuse provision within Article 11- Interest itself.
Also, such transaction shall not be permissible with countries like Belgium where DTAA specifically provides that Dividend also include income even paid in the form of Interest- derived from capital invested by the members of a company other than a company with share capital which is resident of Belgium.

b) Credit card interest:Banks providing credit card facilities is different from debt created between lender and borrower. The service charges received from credit card holders on overdue payments is not interest on loan and thus amount due from card holders is not taxable as interest.

c) Credit Guarantee fees: Guarantee fees are payments for a possible future action and thus be treated as compensation for services performed rather than interest. A common practice in this regard has been to analogize the guarantee fee payment to an interest payment. There is no current Indian jurisprudence pertaining to Credit Guarantee fees.
-In the case of Container Corporation vs. Commissioner [134 T.C. No. 5 (February 17, 2010)], Vitro,
Mexico Parent, did not loan money to its U.S.-based subsidiary, International. Instead, Vitro promised to pay notes issued by International in the event of a default. International paid its parent company a guaranty fee in exchange for that service. The US Subsidiary paid a guarantee fee to the
Mexican Corporation and did not withhold US Income tax from the guarantee. The tax court concluded that the Guarantee fee is not interest because the Mexican parent did not make a loan to the U.S. Subsidiary and that the guarantee fees is not compensation for services because the value of the guarantee stems from the promise made, not from an applied intellectual or manual skill.

-The term interest has been defined in India to include any service fee or charge in respect of money borrowed or debt incurred. Thus, going by the definition, it can be said that the guarantee fees partakes the character of interest. However, in view of the reasoning given in Container Corporation(above) it can be argued that same is not a service fee and hence not in the nature of interest.

d)Loan from Banks -Taxation by the State of source is typically levied on the gross amount of the interest and therefore ignores the real amount of income derived from the transaction for which the interest is paid, is particularly important in the case of financial institutions. For instance, a bank generally finances the loan which it grants with funds lent to it and, in particular, funds accepted on deposit. Since the State of source, in determining the amount of tax payable on the interest, will usually ignore the cost of funds for the bank, the amount of tax may prevent the transaction from occurring unless the amount of that tax is borne by the debtor.

For that reason, many States provide that interest paid to a financial institution such as a bank will be exempt from any tax at source. 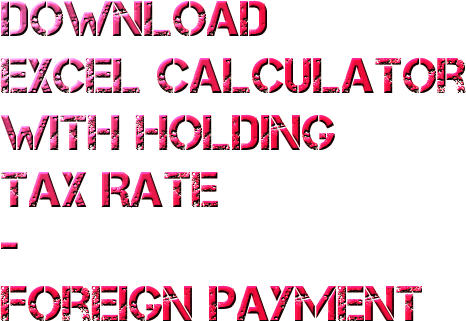 Though India allows the reduced/nil tax rate on interest paid to financial institution but such reduction is subject to approval by central government.
However, there are certain DTAAs where lower rate of taxation is prescribed where loan is taken from a bank or financial institution even without any specific approval from Government. DTAA with Mauritius provides NIL rate of taxation where interest is paid to bank carrying on bonafide banking business. And DTAA with USA/UK/Denmark/Turkey/Singapore/Philippines/Nepal/Korea provides reduced rate of taxation (10% as against general rate of 15%). DTAA with UAE provides 5% for bank and 12.5% for other entities. Thailand DTAA (10% for banks and 25% for others)
-Hence, where loan is proposed to be taken from above mentioned countries, it would be better if loan is sourced directly from foreign banks to avail lower rate of taxation and hence reduced cost of borrowing. Such loan may be guaranteed by foreign holding company for which guarantee fees may be paid which again is not taxable as interest.