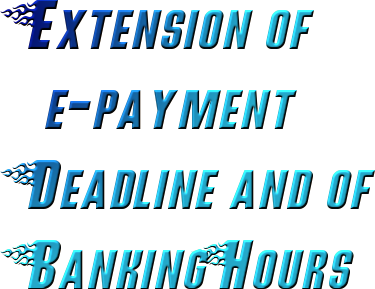 GOVERNMENT OF INDIA
MINISTRY OF FINANCE
DEPARTMENT OF REVENUE
CENTRAL BOARD OF EXCISE AND CUSTOMS
Service Tax Wing
CIRCULAR NO. 182/01/2015 – ST
New Delhi, the 27th March 2015
To
The Principal Chief Commissioners/Chief Commissioners of Central Excise and Service Tax (All),
The Director General of Service Tax,
The Director General of Systems & Data Management,
The Director General of Central Excise Intelligence,
The Commissioners of Service Tax (Audit) (All)
The Commissioners of Central Excise (Audit) (All)
Subject: Extension of e-payment deadline and of banking hours
The Reserve Bank of India has issued instructions vide RBI/2014-15/515 dated March 25, 2015wherein it has been decided that all agency banks shall keep the counters of their designated branches conducting government business open for full day on March 30, 2015, and till 8.00 p.m. on March 31, 2015. All electronic transactions would, however, continue till midnight of March 31, 2015.
2. Thus the assessees can make e payment till the mid night of March 31, 2015.
3. It is requested that the trade notice may be issued to publicize the extended e payment hours as well as the extended banking hours.
F. No . 137/155/2012-Service Tax ( Pt -II)
(Rajeev Yadav)
Director (Service Tax)