BASIC WAGES – HOW TO CONSTRUE
The expression ‘basic wages’ has to receive an interpretation which would achieve the object of the enactment. The Act has to be considered in its proper perspective and contextual so as to fructify the legislative intentions underlying the enactment. If two views are possible, the view which furthers the legislative intention should be preferred to one which would frustrate it. 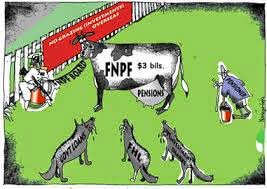 SOME OF THE ITEMS THAT ARE INCLUDED IN THE TERM “WAGES” FOR THE PURPOSE OF CONTRIBUTION UNDER SECTION 6 OF EMPLOYEES PROVIDENT FUND AND MISC. ACT 1952
I. Maternity benefits and sickness allowance are part of  ‘Basic Wages’

II.  Ad hoc allowance included for purpose of contributions
1. Nomenclature of a payment to an employee is not decisive of its liability to PF Contributions but the pith and substance of the payment is;
2. On their own admitted statements in the management’s representation, the ad hoc allowance is being paid towards the demand of employees for revision of pay and dearness allowance;
3. The ad hoc allowance is aid to all employees; and
4. The observation of the Hon’ble Supreme Court in the Union of India and others v Ogale glass Works which states that the award of industrial tribunal cannot stand in the way of enforcing the statutory provision cast on the Regional Provident Fund Commissioner under the Employees’ Provident Funds and Miscellaneous Provisions Act, 1952. In view of that, any agreement entered into between the employer and employees’ union against deduction of PF on the adhoc allowance in question is not binding on this organization.
III.  Bonus : When the word Bonus was used without any qualification in Sec.2(b) (ii), the legislature had in mind every kind of bunus that may be payable to an employees.

IV. Incentive to the employees is paid only for the work done by the employees during the course of eight    hours and is not over and above the prescribed time of work. It forms part of basic wages and contribution in respect thereof is bound to be paid.
V.  Interim advance and settlement benefit forms part of basic wages and are liable for payment of provident fund contribution and other dues under the Act.
VI.     Encashment of earned leave by the employees forms part of basic wage.
LIABILITY OF EMPLOYER
It is the duty of the employer to contribute towards provident fund. The employers agreement, with the employee, not to deduct does not discharge the employer of his obligation in law to make payment. The term of the settlement which provides that there shall be no deduction only means that the company has agreed to take on the liability
VII Payment of extra work – whether overtime
The definition of basic wage includes the emoluments paid to an employee on holidays. If extra work is done on time, it would not come within the definition of overtime and as such the payments received by the workmen for extra work within the normal duty hours, would not be overtime.
Similarly, the reward for good work is not similar to overtime and if it is taken so, it would tantamount to taking cognizance of an illegality committed by the establishment.
RBI cuts policy rates by 25 basis points
Statement by Dr. Raghuram G Rajan, Governor on Monetary Policy- Date : 15 Jan 2015
Since July 2014, inflationary pressures (measured by changes in the consumer price index) have been easing. The path of inflation, while below the expected trajectory, has been consistent with the assessment of the balance of risks in the Reserve Bank’s bi-monthly monetary policy statements.  To some extent, lower than expected inflation has been enabled by the sharper than expected decline in prices of vegetables and fruits since September, ebbing price pressures in respect of cereals and the large fall in international commodity prices, particularly crude oil. Crude prices, barring geo-political shocks, are expected to remain low over the year. Weak demand conditions have also moderated inflation excluding food and fuel, especially in the reading for December. Finally, the government has reiterated its commitment to adhering to its fiscal deficit target.
These factors have significantly reduced the momentum of inflation, compensating for the widely anticipated ending of favourable base effects. Households’ inflation expectations have adapted, and both near-term and longer-term inflation expectations have eased to single digits for the first time since September 2009. Inflation outcomes have fallen significantly below the 8 per cent targeted by January 2015. On current policy settings, inflation is likely to be below 6 per cent by January 2016.
These developments have provided headroom for a shift in the monetary policy stance. It may be recalled that the fifth bi-monthly monetary policy statement of December had stated that “if the current inflation momentum and changes in inflation expectations continue, and fiscal developments are encouraging, a change in the monetary policy stance is likely early next year, including outside the policy review cycle”. In its public interactions, the RBI had committed to initiate the process of monetary easing as soon as data indicated that medium term inflationary targets would be met. Keeping this commitment in mind, it has been decided to:

Consequently, the reverse repo rate under the LAF stands adjusted to 6.75 per cent, and the marginal standing facility (MSF) rate and the Bank Rate to 8.75 per cent with immediate effect.
The fifth bi-monthly monetary policy statement also stated that once the monetary policy stance shifts, subsequent policy actions will be consistent with this stance. Key to further easing are data that confirm continuing disinflationary pressures. Also critical would be sustained high quality fiscal consolidation as well as steps to overcome supply constraints and assure availability of key inputs such as power, land, minerals and infrastructure. The latter would be needed to ensure that potential output rises above the projected pick-up in growth in coming quarters so as to contain inflation.