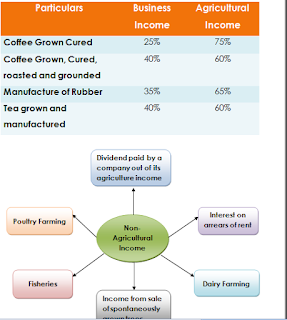  When Agricultural produce is subjected to manufacturing process then profit on sale has two components:
1. Agricultural Income.
2. Business Income. 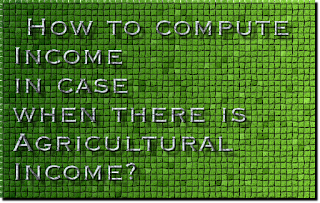 1. What are the conditions to be satisfied to treat rent or revenue derived from land as agricultural income?
Ans: The following conditions must be satisfied to treat income derived from land as “agricultural income”:
i) Rent or Revenue should be derived from land
Explanation to Rent from Land: Rent should be a payment in cash or in kind or in money or in money’s worth, by one person to another in respect of a grant of a right to use land. To treat any income or revenue in the nature of rent, there should be an established relationship of a landlord and tenant or lessor and lessee between the parties.
Further Explanation to Rent or Revenue should be derived from land: This would mean that such rent or revenue should spring from land or arise from land. If the immediate and effective source is not land, the income cannot be considered to be agricultural income.
ii)  Land should be situated in India.
iii) The Land should be used for agricultural purpose.
Explanation to above condition- The land is said to be used for agricultural purposes where the following two types of operations are carried out on such land:
a) Basic Operations: These involve cultivation of the ground, in the sense of tilling of the land, sowing of the seeds, planting and similar operations on the land. Such basic operations demand the expenditure of human labour and skill upon the land itself and further they are directed to make the crop sprout from the land.
b) Subsequent Operations: After the crop sprouts from the land, there are subsequent operations which have to be resorted to by the agriculturists for the efficient production of the crop such as, weeding, digging the soil around the growth, prevention of the crop from insects and pests, etc.
Both the basic and the subsequent operations together form the integrated activity of the agriculturists. Basic operations must be performed before any income is called agricultural income.

2. When will an income attributable to building (a farm house) be treated as agricultural income?
Ans: Any income attributable to a building (a farm house) is treated as agricultural income provided the following conditions are satisfied-
 Building should be owned and occupied by the land-holder if he receives rent or revenue from the land. On the other hand, in the case of a cultivator or land-holder receiving rent in kind, it is enough that the building is occupied by him that is to say without being owned by the occupier.
 Building should be on or in the immediate vicinity (means the area near) of land situated in India which is used for agricultural purposes.

3. Whose onus is to prove that the income earned was agricultural income?
Ans: If assessee claimed income earned as agricultural income but failed to furnish any evidence to prove such income as agricultural income, due to which assessing officer assessed the said income as “income from other sources”. It was held by the High Court that assessee failed to properly explain the receipt of income and did not furnish any evidence to support his claim. In the absence of any materials to substantiate the claim or onus discharged by assessee, assessee’s contention cannot be accepted.

5. Whether ownership of land is essential factor for exempting the income derived agriculture?
Ans: In the case of rent or revenue, it is essential that the assesse has an interest in the land (as an owner or a mortgagee) to be eligible for tax-free income.
In the case of agricultural operations, it is not necessary that the cultivator be the owner of the land. He could be a tenant or sub-tenant.

6. What if agriculture operation is carried on Urban Land?
And: If agricultural operations are carried out on land, either urban or rural, the income derived from sale of such agricultural produce shall be treated as agricultural income and will be exempt from tax.