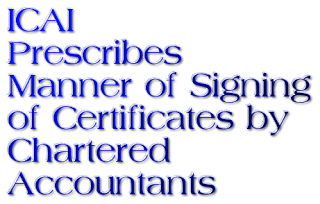 2.  On a consideration of the matter, the Council, with a view to bring uniformity in the manner of signing of certificates, has decided to require the members of the ICAI to include (in addition to any other requirements in this regard prescribed by the relevant law or regulation under which the certificate is being issued) the following details in their “Signatures” on the certificates issued by them: