We have given few major issue related to 31st March.The list provided here under is not exhaustive and all viewers are requested contribute to list. 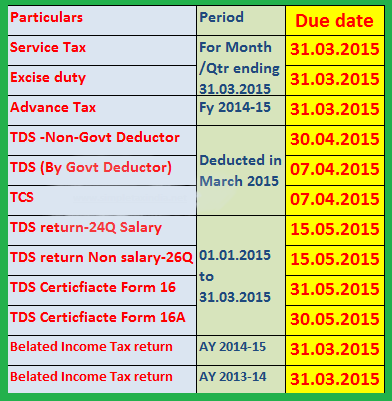 Same rule of Service Tax is applicable on Excise Duty also, So excise duty due for month/quarter ended 31st March is to be deposited by 31st March,2015 itself.

3. Due dates of TDS(tax deducted at source) for month of March :

If you have not filed your Income Tax return for the assessment year 2013-14 ,then go for it before 31st March 2015 ,you still have a chance ,as belated return can be filed within one year from the end of assessment year.

If are planning to save tax u/s 80C or 80D(Medical /health insurance ) or other section then purchase Tax saving instruments like,NSC,PPF ,Lic receipt before 31st March so that you can take maximum benefit provided under these heads.

Further make sure that you cheque also got cleared before 31st March , as in few investment schemes cheque clearing date may be treated as your investment date .So its better to deposit in cash except section 80D (medical insurance/health insurance).

Due date of filing of return in respect of Financial  year 2013-14 ,who failed to file return on due dates  Wealth Tax Form BA

If your house is not completed before 31st March then you can not avail income tax benefit of house loan interest as well as House loan repayment benefit in financial year 2014-15.

If you have opened your PPF account in 01.04.1998 to 31.03.1999 then  15 years was completed on 31.03.2014 .And if you want to extended your account further for block period of 5 years with contribution each year then you should apply on form H before 31.03.2015(within one year from completion of 15 years).(you can extend your PPF account by any time subject to 5 years each time). If you don not apply on form H by this date , your account will be extended without subscription and can not be converted back with subscription.

The same rule is applicable for extension after first block completion after 15 years.

Copyright :This post can not be copied and published on other websites without written permission of Simpletaxindia. Legal Action may be taken against violation