Negative List :-
i. Entry No. (j) that covers ‘admission to entertainment event or access to amusement facility’ is proposed to
be omitted making the activity taxable. Consequently the definitions of ‘amusement facility’ [Section 65 B (9)]
and ‘entertainment event’ [Section 65B (24)] shall also be omitted. Further, Notification No 25/2012-ST has
been amended to provide some exemptions in this regard, which has been discussed below with exemptions.
ii. Entry No. (a)(iv)- In the existing clause, ‘support service’ is proposed to be substituted with ‘any service’ as
a result of which any service provided by government to business entity has been brought into tax net.
Consequently, the definition of ‘support service’ vide Section 65B(49) is being omitted and “Government” has
been defined vide proposed Section 65B(26A).
iii.Entry No. (f)- Clause (f) of the 66 D has been amended to exclude the ‘services provided by way of any
processes which are amounting to manufacture of alcoholic liquor for human consumption’ as a result of which
manufacture or production of alcoholic liquor for human consumption bought into tax net. Accordingly the
definition of the word “process amounting to manufacture” has been amended.

INDIRECT TAX EXPRESS
FORTNIGHTLY e-NEWS LETTER FROM M/s D A V A & ASSOCIATES
Chartered Accountants
February, 2015 VOL # 9, ISSUE # 2
Interesting Facts about the Union Budgets:
The budget presented by Manmohan Singh in 1992-93 is often hailed as most important budget of India ever
created. He reduced import duty from 300% to 50%, which liberalized Indian economy, and the modern IT
industry owes much of its presence to that decision.
The Finance Minister Shri Arun Jaitley presented the Union Budget
2015-16 on 28th day of February, 2015.
There are some vital changes in the indirect taxes, particularly, in
Central Excise and Service Tax. Due to space constraints, we have
covered only important changes in relation to service tax in this E-News
Letter.Interesting Facts about the Union Budgets:
Jawaharlal Nehru, Indira Gandhi and Rajiv Gandhi are the only Prime Ministers who have also presented
Budget inside the Parliament.
To be effective on the date of enactment of the Finance Bill, 2015:-
“Government” has been defined vide proposed Section 65B(26A) to mean ‘the Departments of the 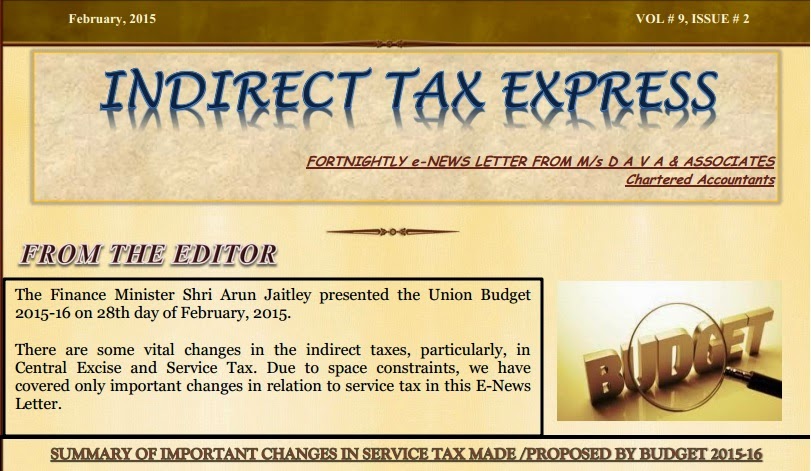 section to clarify the scope of this provision. As illustrated, agency services provided a Bank to RBI are input
services used by RBI for provision of its main service. Accordingly, banks providing agency service to or

in relation to services of RBI, are liable to pay Service Tax on the agency services so provided by virtue of
the existing section 66F (1).
Definition of Consideration in Clause (a) of the explanation to Section 67 has been proposed to be
amended to include any reimbursable expenditure or cost incurred by the service provider and charged in the
course of providing or agreeing to provide a taxable service
Section 73:-
i. A new sub-section (1B) is proposed to be inserted to provide that recovery of the Service Tax amount
self-assessed and declared in the return but not paid shall be made under section 87, without service
of any notice under sub-section (1) of section 73; and
ii. Sub-section (4A) that provides for reduced penalty if true and complete details of transaction were
available on specified records is proposed to be omitted.