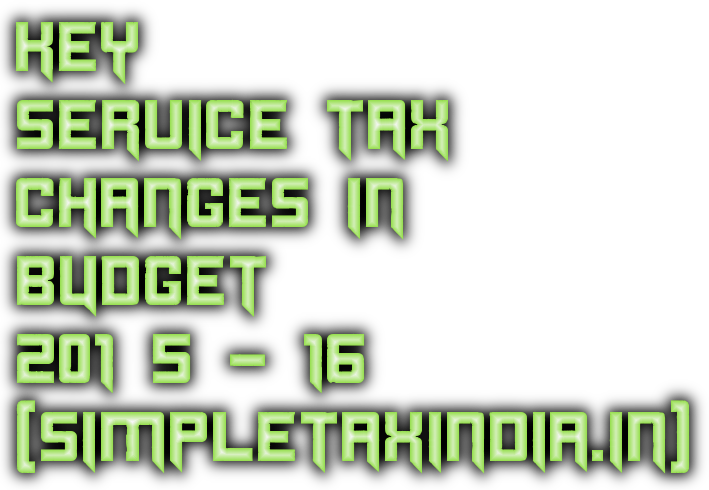 It is pertinent to note that for the aforesaid services liability to pay service tax is cast upon the recipient of service.
[refer omission of Sr. No.29 (c), (d) and (e) of Not. No.25/2012-ST]
m. At present, services provided to an exporter for transportation of goods by Goods transport agency to port or airport (including transportation to and from Inland container depot or container freight station) are not liable to service tax vide Not. No. 31/2012-ST.
Now, this exemption is extended even when goods are exported through Land Customs Station (LCS). This will benefit export to Pakistan, Bhutan, Nepal by LCS.
[refer Not. No. 4/2015-ST]
Changes in abatment provided in Not. No. 26/2012-ST [vide Not. No. 8/2015-ST]
a. Transportation of goods by road attracts service tax on 25% value whereas transport of goods and passengers by rail attracts service tax on 30%. In case of passengers transport by vessel service tax is payable on 40%.
Now, uniform taxable value of 30% for all aforesaid services is prescribed. Also, a uniform condition of non-availment of CENVAT Credit on inputs, capital goods and input services is prescribed.
b. At present, transport of passengers by air (without discrimination between aam and khaas aadmi!) attracts service tax on 40% value.
Now, in case of economy class (aam aadmi class!) service tax will continue to be payable on 40% value, however, for the classes other than economy, service Tax would be payable on 60%.
c. Abatement of 30% available to services in relation to chit is withdrawn.
Changes in Reverse Charge Mechanism [vide Not. No. 7/2015-ST]
a. At present, when a manpower supply agency and security service agency being an individual/ firm etc provides services to a body corporate, service tax of 25% is to be paid by service provider and 75% is payable by service receiver.
Now, in aforesaid cases, the entire (100%) liability is cast on the service receiver.
b. In respect of services provided by mutual fund agents/ distributorsto Mutual fund or AMC and services provided by selling or marketing agent of lottery tickets to a lottery distributor or selling agent, the entire liability to pay service tax is cast on service receiver.
Changes in CENVAT Credit [vide Not. No. 6/2015- CE( NT)]
a. Cenvat Credit of service tax paid under partial reverse charge by the service receiver is allowed on payment of service tax (without linking it to the payment to the service provider).
Changes applicable from date of assent to Finance Bill, changes applicable from the date of notification after assent to Finance Bill will be discussed in Part II of this article.
(CA Shankar Rochlani and CA VaishaliKharde also shared their inputs for this article.)