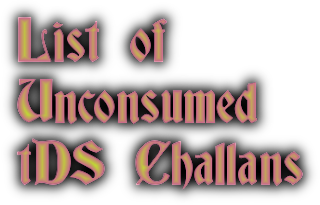 Reason of Generation of unconsumed Challan :-
Challan is not used in TDS / TCS return.
Amount of Interest on TDS is excess in Challan and I.T. Deptt has less charged interest on TDS.
Deductor has tagged less TDS  amount of Deductee in comparison with the Amount deposited in Challan.