Skip to content
The Lok Sabha today passed the Companies (Amendment) Bill, 2014, after Corporate Affairs Minister Arun Jaitley told the house that some of the original provisions were only posing hurdles to doing business in the country.

“The object of these amendments is solely to ease the process of doing business in India. None of them have any ulterior motive,” Jaitley, who also holds the finance portfolio, said replying to the debate on amending the Companies Act, 2013.

“Some of its provisions would have made doing business in India extremely difficult and the investment environment in the country would be disrupted by such a law,” he added.

The amendments to the Companies Act, 2013, which came into effect from April 1 this year, have been proposed in order to address some issues raised by stakeholders.

Among the major concerns of stakeholders were protecting confidentiality of board resolutions, as well as the provision of auditors being required to report suspected frauds at the companies audited by them.

Citing the provision on the public scrutiny of board resolutions, Jaitley said that nowhere in the world was such a practice being followed.

“A company deciding in its board on its next model, a new product trademark or the funding mechanism would not like such matters to be known to competitors,” Jaitley said.

Towards meeting a “corporate demand”, the relevant amendment now prohibits public inspection of board resolutions filed in the registry.

Under the new norms, the paid-up capital criteria has been scrapped while threshold limits for various transactions for getting shareholders’ nod has now been stipulated.

Another amendment approves prescribing specific punishment for deposits accepted, a condition that was left out in the act inadvertently.

“While enforcing the provision, we found that there were certain difficulties with regard to the enforcement of certain provisions or certain errors, while drafting had taken place,” Jaitley said earlier, regarding the scope of the present amendments.

Stakeholders were also concerned that stringent regulations for related party transactions, or those transactions between the company and another in which a board member or members are interested, could hurt routine business activity. 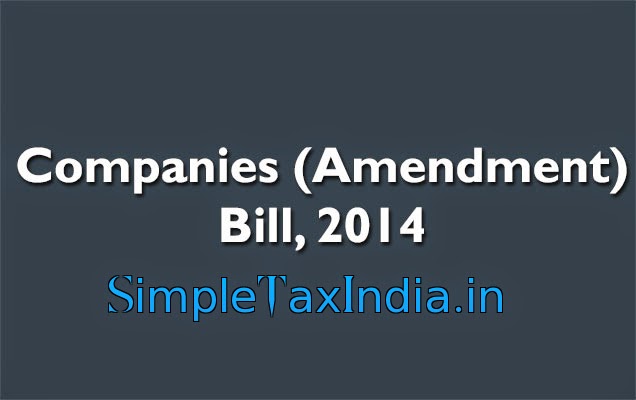 The amendment also proposes to exempt corporates from the need to get shareholders’ nod in the case of related party transactions valued lower than ₹ 100 crore or 10 percent of net worth.

Under the old system, shareholders’ permission through a special resolution was required in case of related party transactions for all firms with a paid up capital of ₹ 10 crore or more.

Another amendment exempts related party transactions between holding companies and wholly owned subsidiaries from the requirement of approval of non-related shareholders.

Intervening in the debate, leader of the Congress party in the Lok Sabha, Mallikarjun Kharge, said the bill should be referred to the Standing Committee for re-examination in line with the practice in the past.