The Corporate Affairs Ministry has had extensive consultations with stakeholders in the matter. The Union Cabinet, chaired by the Prime Minister Shri Narendra Modi, on 2nd
Sr No. December 2014 approved the introduction of the Companies (Amendment) Bill, 2014 in Parliament to make certain amendments in the Companies Act, 2013. This would be among the first major initiatives by the government to make changes in the country’s regulatory framework to improve its global ranking for ease of doing business, where India has been ranked very low at the 142nd position in the latest World Bank report and includes provision to ensure that frauds beyond a certain threshold would need to be mandatorily reported by the auditors to the government. 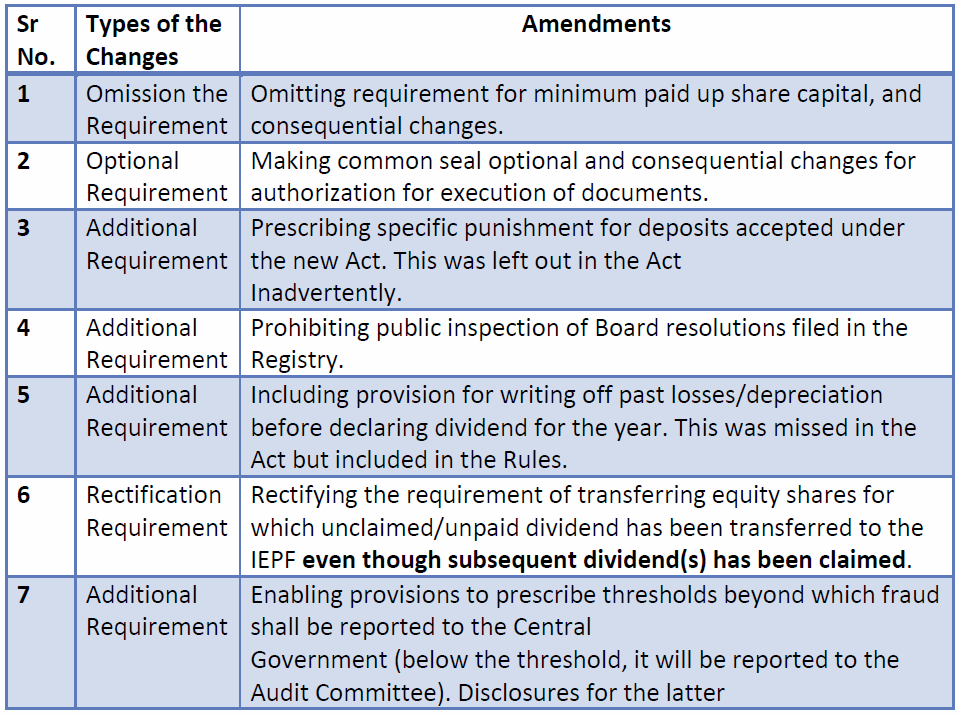 3
Additional Requirement
Prescribing specific punishment for deposits accepted under the new Act. This was left out in the Act Inadvertently.

4
Additional Requirement
Prohibiting public inspection of Board resolutions filed in the Registry.

5
Additional Requirement
Including provision for writing off past losses/depreciation before declaring dividend for the year. This was missed in the Act but included in the Rules.

6
Rectification Requirement
Rectifying the requirement of transferring equity shares for which unclaimed/unpaid dividend has been transferred to the IEPF even though subsequent dividend(s) has been claimed.

11
Exemption
Exempt related party transactions between holding companies and wholly owned subsidiaries from the requirement of approval of non-related shareholders.

12
Amendment
Bail restrictions to apply only for offence relating to fraud u/s 447.

14
Amendment
Special Courts to try only.