Skip to content
AS per Rule 6(2) of the Service Tax Rules, the assessee is required to pay Service Tax electronically, through Internet banking.

What does this mean? Is there any other mode of paying the tax? If electronic payment is mandatory, why should they accept any other form of payment?

Nonetheless, the proviso clause mentions that the Assistant/Deputy Commissioner may for reasons to be recorded in writing, allow the assessee to deposit the service tax by any other mode other than internet banking. So, is “any other mode” referring to “any other mode of electronic payment” or is it referring to the time tested ‘payment in cash/cheque’? A simple one-liner rule but which throws up many possibilities! 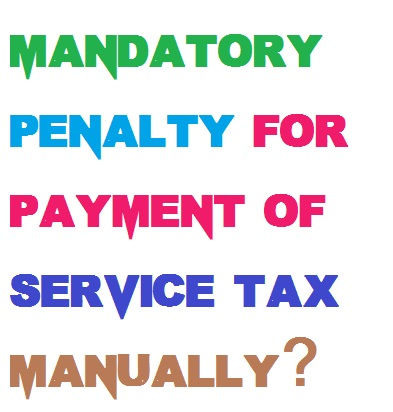 An assessee recently received the following letter from a Service Tax Superintendent:

The AG Audit has conducted a theme based audit on “Tax Accounting and Reconciliation” covering the payments made by the assessees falling under this Commissionerate. In terms of proviso to Rule 6(2) of the Service Tax Rules, 1994, all assessees who paid duty/service tax of ten lakh rupees or more, in the preceding financial year are required to deposit the tax electronically, through internet banking

During, the course of audit, the AG has pointed out that you have paid certain amount of Service Tax physically instead of paying electronically during the year 2013-14 and you are liable to pay a penalty of Rs. 10,000/-(Ten thousand Only) under Section 77(1)(d) of the Finance Act, 1994 for contravention of Rule 6 (2 ) of the Service Tax Rules, 1994.

In view of the above, it is requested to pay the penalty of Rs.10,000/- immediately, in compliance of the objection raised by the AG Audit and intimate the details of the payment to this office.

Is the Department on a fast track? Have they forgotten concepts like Show Cause Notice, hearing, adjudication etc?

The learned Superintendent is not even sure as to whether the assessee has really failed to pay the tax electronically – he doesn’t mention as to when the assessee failed. He only depends on the AG Audit.

Can a service recipient who is required to pay ST on reverse charge basis collect ST paid from provider?

WE received this mail from a Netizen –

+ As per the ST law, “X” is required to pay 100% Service Tax under reverse charge basis although service is provided by “Y”.

+ “X” and “Y” have a mutual understanding that Y will bear the service tax component.

Is this action is proper & legal in law?

Let us revisit the issue in pure mathematical and logical terms –

++ Going by the rationale contained in section 73A(1) what is collected from any person in excess of the ST assessed and paid is to be deposited with the Central Government.

++ The assessee “X” not having collected amount “in excess of service tax assessed and paid” , he does not fall within the ambit of section 73A(1) of the FA, 1994.

(2) Where any person who has collected any amount, which is not required to be collected, from any other person, in any manner as representing service tax, such person shall forthwith pay the amount so collected to the credit of the Central Government.

So, the whole bogey of section 73A being attracted in the present case is mischievous, to say the least.

This can be compared with the 8% amount payable under Rule 57CC/ Rule 6. Department was always of the view that the 8% amount shall not be collected from the buyer of exempted goods. The issue is well settled now with Larger Bench of Tribunal holding that the provisions of Section 11D are not attracted (Unison Metals Vs CCE – 2006-TIOL-1337-CESTAT-DEL-LB)

Therefore there is no case to invoke the provisions of Section 73A if service tax payable under reverse charge is collected from the service provider.

Also CENVAT Credit cannot be denied to X on the ground that he has collected service tax from the service provider as the same stands paid to the Government.

Now they have again imposed the duty with effect from 18th February 2015 for a period of another five years.

There was no anti dumping duty on this product during the period 10th June 2014 to 17th February. Was there no dumping during this period?

The original notification 75/2008-Cus referred to imposition of anti dumping duty on imports from Korea ROK, which is Republic of Korea i.e South Korea. The present notification refers to Korea RP. Are they are referring to the same country?

THE Central Bureau of Investigation has arrested a Superintendent of Central Excise, Khamgaon (Maharashtra) for demanding & accepting a bribe of Rs. One lakh from the complainant.

The complainant alleged that the Superintendent of Central Excise demanded a bribe of Rs.5 lakhs from him for not imposing penalty/excise duty on his plant. CBI laid a trap and the accused was caught red handed while demanding & accepting a bribe of Rs. One lakh as first instalment from the complainant. Searches were conducted at the office & residential premises of the accused and incriminating documents recovered.

The arrested accused was produced before the Court and remanded to Judicial Custody.

Can you believe it – A superintendent demanding a bribe of Rs. 5 Lakhs and if this was to waive penalty as stated by CBI, obviously some higher officers are involved, for no superintendent can impose or waive a penalty that could attract a bribe of Rs. 5 lakhs. It is heard that bribe amounts have galloped very high and audit parties routinely demand bribes ranging from 10 lakhs to 30 lakhs.

The mindless confirmation of Show Cause Notices by adjudicating authorities has ensured that corruption thrives in the field. The revenue that can be collected by all the notices in the department is not even ten per cent of the total revenue. The Government should consider delinking adjudication from the department.