Finance Act, 2015 has made the following two amendments in section 86(1):
(a) The words ‘any assessee’ have been substituted with the words ‘save as otherwise provided herein, an assessee’ and, 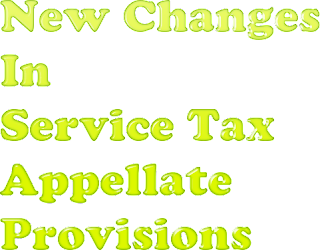 Section 86 has been amended to prescribe that remedy against the order passed by Commissioner (Appeal), in a matter involving rebate of Service Tax, shall lie in terms of section 35EE of the Central Excise Act. It is also been provided that all appeals filed in Tribunal after the date the Finance Act, 2012 came into effect and pending on the date when the Finance Bill, 2015 receives assent of the President shall be transferred and dealt in accordance with section 35EE of the Central Excise Act.
Effect of Amendments
These amendments shall have the following effect w.e.f. 14.05.2015–
(1)  The remedy of appeal to Tribunal u/s 86 is not available in every case as it has now been provided subject to the saving clause ‘save as otherwise provided herein’. The provisos added provide that saving. Thus, scope of section 86 has been curtailed.

(2)  Any appeal against the order of Commissioner (Appeal) in relation to matters concerning rebate of Service Tax (e.g. exports) shall be governed in terms of section 35EE of Central Excise Act, 1944.

(4)  Orders u/s 85 relating to export of services covering the specified matters, i.e.,
(i) Grant of rebate of Service Tax on input services
(ii) Rebate of duty paid on inputs
used in provision of such exported service, shall be dealt with as per section 35EE of Central Excise Act, 1944.