Skip to content
As we know HUF (Hindu Undivided Family) is assessed as a separate person under provisions of Income Tax Act, 1961. It has its own identity and right to own property but not a juristic person. It can sue and be sued as a person. It is governed by Karta of the family and consists of coparceners of a single family.
HUF is charged at the same rate of taxes as applicable to individuals according to the provisions of Income Tax Act, 1961.
Partition means division of property. There must be property which can be physically divided among the members of the family. The division will be such as that the share of each member will be determined physically.
Note: a division of income from any property, without physical division of such property does not amount to partition.
These persons are entitled to demand for partition of property; 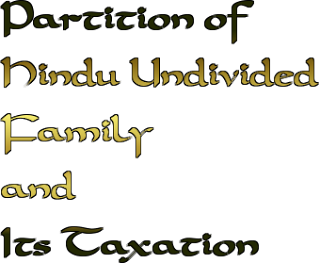 1. All Coparceners;
2. A son in the womb of his mother at the time of partition of the property;
3. Mother gets equal share if there is partition among sons after death of father and;
4. Wife gets a share equal to that of a son at the time of partition between father and sons
Coparceners; As defines as two or more persons sharing an inheritance or joint heirs of a property.
A person who shares equally with others in the inheritance of an undivided estate or in the rights to it.
Coparcener defined in Law Dictionary as;
A species of estate, or tenancy, which exists where lands of inheritance descend from the ancestor to two or more persons. It arises in England either by common law or particular custom. By common law, as where a person, seised iu feesimple or fee-tail, dies, and his next heirs are two or more females, his daughters, sisters, aunts, cousins, or their representatives; in this case they all inherit, and these coheirs are then called “coparceners,” or, for brevity, “parceners” only.

Partition: partition may be Total or Partial;

Section 171 of the Income Tax Act, 1961 provides that once income of a joint family  is assessed in the hand of HUF , it will continued to be assessed as such until one or more coparceners claims partition in the family.

Assessment in case of Total Partition;

Note: The provisions of Section 171(9) is not applicable in a case where partial partition has taken place in a joint family , which has never assessed as HUF or joint family .

In this case if above mentioned cases are satisfied then such family will continued to be assessed as if no such partial partition has taken place i.e. property or source of income will be deemed to continue to belong to HUF and no member is deemed to be separated from HUF.

In this case provisions of Section 171(9) will be applicable and two essential conditions are
(1) Partition will be held after 31.12.1978 and
(2) The partition should be taken place in a HUF, which hereto previously assessed as HUF.

Suppose one of the coparceners has decided to go out of HUF and remaining two are still continuing. Then in this case both conditions are satisfied as given above, the income will be assessed in the hand of HUF and no member will deemed to have separated from the family.

Note: As decided in case of Mohanlal K. Shah, HUF v. ITO (2005) SOT 316(Mumbai) in order to be acceptable or recognizable partition under section 171, a partition should be complete partition with respect to all members of HUF and in respect to all properties of HUF and also there should be actual division of property as per defined/specified shares allotted to each individual member of HUF property.

ITO v. P. Shankaraiah Yadav 92004) 91ITD 288(HYD) the court has decided that setting apart certain assets of an HUF in favour of certain coparceners on the conditions that they will not made any claim in the property of the HUF is a partial division of properties of HUF and assessing officer may ignore the partition according to the provisions of Section 171(9) of the Income Tax Act, 1961.

Status in State of Kerala;

The Hindu Joint Family Abolition Act, 1975 was enacted to abolish the joint family system among hinus in the state. Since the Hindus in the state of Kerala are governed by Mitakshara School of Hindu law. After December 1, 1976 all joint families have been totally abolished and the properties belonging to these families and divided in the hand of their coparceners. Since joint families were abolished due to enactment of law not act of the parties in this case provisions of Section 171 are not applicable.