Skip to content
IN his Budget 2004 Speech, the then Finance Minister mentioned –

22. In my scheme of things, no issue enjoys a higher priority than providing basic education to all children. The NCMP mandates Government to levy an education cess. I propose to levy a cess of 2 per cent. The new cess will yield about Rs.4000 – 5000 crore in a full year. The whole of the amount collected as cess will be earmarked for education, which will naturally include providing a nutritious cooked midday meal. If primary education and the nutritious cooked meal scheme can work hand in hand, I believe there will be a new dawn for the poor children of India.

151. Finally, there is the tax mandated by the NCMP. That is an education cess on all taxes. I propose to levy a cess of 2 per cent on income tax, corporation tax, excise duties, customs duties and service tax. 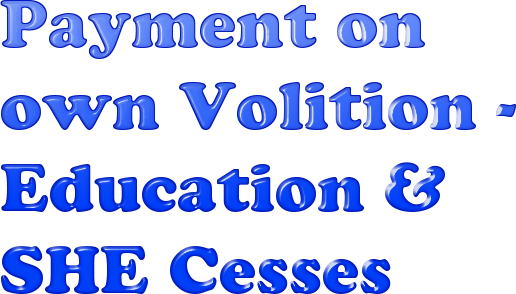 In the year 2007, the same Finance Minister said –

On both the occasions, the Finance Minister was P.Chidambaram.

It is not known whether the noble objectives of imposing and collecting the Education Cesses have been met. Nonetheless, the gargantuan amount collected by the Central Government in the past decade can always be gleaned from the Budget documents. Hopefully, the Education Cesses collected in all these years has been put to good use use by the Centre.

It seems that the Government has come to a conclusion that Education expenses, primary or secondary, can be managed by them to an extent and, therefore, they have turned their attention to cleaning Bharat with the broom bought by the Swachh Bharat Cess. That Cess I will discuss in the next article.

Inasmuch as the Hon’ble Finance Minister Arun Jaitley while discontinuing the Education Cesses on Excise duty, merging it (proposed) in Service Tax & continuing it on Income Tax said –

121. Introduction of GST is eagerly awaited by Trade and Industry. To facilitate a smooth transition to levy of tax on services by both the Centre and the States, it is proposed to increase the present rate of service tax plus education cesses from 12.36% to a consolidated rate of 14%.

2.5 The education cess on income-tax @ 2% for fulfilment of the commitment of the Government to provide and finance universalised quality based education and 1% of additional surcharge called ‘Secondary and Higher Education Cess’ on tax and surcharge is proposed to be continued for the financial year 2015-16 for all taxpayers .

Before I pen my views on the Clean Cess, not to be confused with the Clean Energy Cess, I do not know what would happen to the assessees who were paying Education Cesses all these days and who had to stop paying it altogether from 01.03.2015 as they were greeted with exemption notifications 14/2015-CE & 15/2015-CE, both dated 01.03.2015.

What happens to the CENVAT credit lying in the manufacturers accounts from 01.03.2015 is nobody’s business, the Government thinks, for there is no clue anywhere in any of the paragraphs of the Finance Minister’s speech or those two letters issued by the Tax Research Unit officials.

It seems that all the manufacturers have to just forget that there ever existed a thing called Education Cess, the primary one or for that matter, the secondary one!

Never mind that the Education Cesses they were supposed to pay for the month of February, 2015 would have to be paid by them as earlier by the 5/6 th March, 2015 under the Budget Heads prescribed for the purpose/by debit in their bulging CENVAT accounts.

And what would happen to those Inputs they would be receiving after 01.03.2015 but which have the Education Cesses loaded on to them – no Credits allowed and so it becomes a Cost to the manufacturer!

And they say that we are in the age where CASCADING effect is to be avoided.

Incidentally, a manufacturer whom I know said he is going to flout the exemption notification and pay Education Cess, come what may!

I told him he should not be doing it. He replied – Go, take a walk!

A quick glance at section 5A(1A) of the CEA, 1944 revealed that it prohibits a manufacturer from paying duty of excise on any excisable goods if the same is granted as an absolute exemption and what the instant manufacturer chose to pay was Education Cess& SHE Cess and this is not exactly EXCISE DUTY.

Curious to know who would be benefited by his paying these cesses when they are exempted, he replied that the consignees are SERVICE PROVIDERS and they are still required to pay the Education Cesses on the taxable services rendered.

What an idea, Sirjee, I told myself.

That apart, what about the duty paid goods that would be received back by the manufacturer in terms of rule 16 of CER, 2002?

Will the manufacturer be allowed to take credit of the Education Cesses reflected in respect of these goods? The law (CCR, 2004) does not prohibit him from taking credit as of now and so he would take the credit and obviously when these goods are cleared again, the manufacturer would debit the quantum of Cesses from the credit account belonging to these Cesses – nothing of use to any recipient but the credit/debit tallies!

And if these goods are received after say, three months, when there is no levy of Education Cess/SHE Cess existing in the statute even in Service Tax?

The lawmakers’ would only know.

But then, such a situation must have arisen when we had Special Excise duty way back in the late eighties – I remember that SED lying in the PLA was allowed to be transferred to the BED head – Circular 23/1986 dated 27.06.1986 refers.

Does the Board have an answer?

In paragraph 98 of his Budget Speech, the Hon’ble Finance Minister said – Our stated policy is to avoid sudden surprises and instability in tax policy.

Sir, if all this hullaballoo is not a ‘sudden surprise’, then what to call them?

In the next part I would like to air my random thoughts about Swachh Bharat Cess – my thoughts are pure, but unfortunately, it appears the Government intention is not!