But now, w.e.f. Assessment Year 2015-16, It is compulsory  to upload online 10E form otherwise claim will be rejected and demand will be raised by I.T. Department. 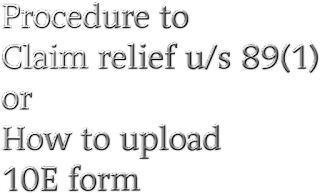 All  Assessees who had claimed rebate u/s 89(1) in the A.Y. 2015-16 have been informed by Income Tax Department through intimation order under section 143(1) that claim amount of rebate has been rejected and raised demand alongwith interest for the same.

Procedure to upload 10E Form
After reading above content it is clear without uploading 10E form , relief under section 89(1) can not be claimed.  Now question is that how can we upload 10E Form alongwith ITR-1 (Sahaj), ITR-2  etc Forms.

After a time gap, it has been found that 10E form is not ITR forms.   10E form is other that ITR form which is available in income tax website  after login for efiling of  incometaxindiaefiling.gov.in as shown in below picture.