Skip to content
The Supreme Court today ruled that Aadhar is not mandatory for availing various welfare schemes of the government. The court made it clear that even for availing facilities PDS, kerosene and LPG distribution system the card will not be mandatory.

It barred the authorities from sharing personal biometric data collected for enrollment under the scheme. A three-judge bench took on record Attorney General Mukul Rohatgi’s statement to this effect. 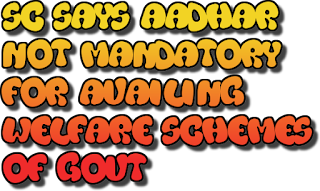 The court said the Centre shall give wide publicity through electronic and print media that the card is not mandatory to avail the schemes. The apex court was hearing a batch of petitions challenging the Aadhar scheme.

It directed that the information received by UIDAI shall not be used for any other purposes, except in criminal investigation with the permission of the court. A Constitution bench of the apex court will also decide the larger question of whether collecting biometric data for preparing Aadhar cards infringed an individual’s privacy and if right to privacy was a fundamental right.