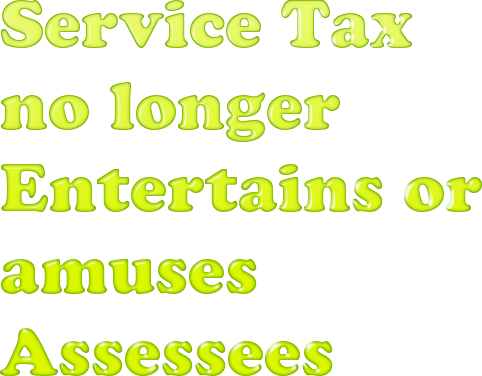 When negative list under Section 66D was introduced vide Finance Bill, 2012 the first draft concept paper justified the inclusion of these activities under negative list on the ground that these activities fall within the domain of the State. Entry 62 of the State List provides for “Taxes on luxuries, including taxes on entertainments, amusements, betting and gambling.” Accordingly, entertainment tax is levied on all such entertainment events by the State. The first issue that merits consideration in this regardis the Constitutional validity of imposition of service tax simultaneously on the very same transaction on which entertainment tax is already being levied by the State.

Implications of Omission of Section 66D(j)

By virtue of omission of clause (j) of Section 66D any activity in relation to admission to an entertainment event or amusement facility would be taxable. This change shall get incorporated in the Finance Act, 1994 when the Finance Bill, 2015 is enacted. The implication of this change brought about in section 66D(j) would be as follows:

(a) Service Tax would be levied on the services provided by way of access to amusement facility providing fun or recreation by means by rights, gaining advances or providing of facilities in any amusements park, amusement arcades, water parks and theme parks.

(b) Service tax would be levied on service by way of admission to entertainment event of concerts, pageants, musical performance concerts, awards functions and sporting events other than the recognized sporting event .

For services by way of admission to an entertainment event, threshold limit Rs. 500/- is proposed. If the amount charged for admission to such an event is upto Rs.500/-, then it does not attract service tax. As stated earlier, Section 66D (j) is being omitted from the negative list and a new Entry No. 46 is proposed to be inserted in mega exemption Notification No. 25/2012-ST to grant exemption by way of admission to entertainment event where the consideration charged is not more than Rs.500/-.

Valuation for the purposes of levy of service tax

It is quite likely that the Department may dispute the valuation and while calculating the threshold limit and may include the cost of admission to an entertainment event plus the entertainment tax.

It appears that the above changes proposed in the Finance Bill, 2015 is an after-effect of the judgments as pronounced in Bharati Telemedia Ltd and Tata Sky Limited (supra). However, the constitutional validity of imposition of service tax must be examined. It would also result in double taxation and would also increase the cost of such services which is definitely not a welcome move for the assessees. Therefore, since the introduction of imposition of service tax on entertainment event as well as on amusement facilities, it would no more continue to entertain or amuse the assessees.

[The Author is working as Senior Associate with Lakshmi Kumaran & Sridharan, Hyderabad]