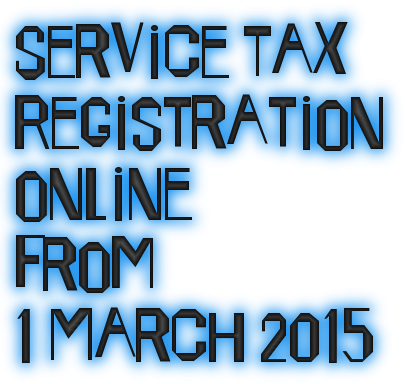 (i) Applicants seeking registration for a single premises in service tax shall file the application online in the Automation of Central Excise and Service Tax (ACES) website www.aces.gov.in in Form ST-
(ii) Registration shall mandatory require that the Permanent Account Number (PAN) of the proprietor or the legal entity being registered be quoted in the application with the exception of
Government Departments for whom this requirement shall be non-mandatory. Applicants, who are not Government Departments shall not be granted registration in the absence of PAN. Existing registrants, except Government departments not having PAN shall obtain PAN and apply online for conversion of temporary registration to PAN based registration within three months of this order coming into effect, failing which the temporary registration shall be cancelled after giving the assessee an opportunity to represent against the proposed cancellation and taking into consideration the reply received, if any.

(iii) E-mail and mobile number mandatory: The applicant shall quote the email address and mobile number in the requisite column of the application form for communication with the department. Existing registrants who have not submitted this information are required to file an amendment application by 30-4-2015.

(iv) Once the completed application form is filed in ACES, registration would be granted online within 2 days, thus initiating trust-based registration. On grant of registration, the applicant would also be enabled to electronically pay service tax.

3. Documentation required
The applicant is required to submit a self attested copy of the following documents by registered post/ Speed Post to the concerned Division, within 7 days of filing the Form ST-1 online, for the purposes of verification:-

(i) Copy of the PAN Card of the proprietor or the legal entity registered.

(iii) Document to establish possession of the premises to be registered such as proof of ownership, lease or rent agreement, allotment letter from Government, No Objection Certificate from the legal owner.

(vi) Authorization by the Board of Directors/Partners/Proprietor for the person filing the application.

(vii) Business transaction numbers obtained from other Government departments or agencies such as Customs Registration No. (BIN No), Import Export Code (IEC) number, State Sales Tax Number (VAT), Central Sales Tax Number, Company Index Number (CIN) which have been issued prior to the filing of the service tax registration application.

4. Where the need for the verification of premises arises, the same will have to be authorized by an officer not below the rank of Additional /Joint Commissioner.

5. The registration certificate may be revoked by the Deputy/Assistant Commissioner in any of the following situations, after giving the assessee an opportunity to represent against the proposed revocation and taking into consideration the reply received, if any:

(i) the premises are found to be non existent or not in possession of the assessee.

(ii) no documents are received within 15 days of the date of filing the registration application.

(iii) the documents are found to be incomplete or incorrect in any respect.