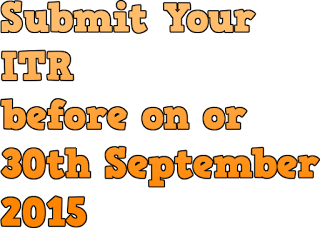 In the other hand, Income Tax department is conveying again and again that the Last Date of filing of Income Tax return will not be extended and requesting to their assesses to submit Income Tax returns upto 30th Sep, 2015 for the Assessment Year 2015-16.

The Press Release dated 9th Sep, 2015 issued by CBDT is given below :-

Government of India
Ministry of Finance
Department of Revenue
Central Board of Direct Taxes
PRESS RELEASE
New Delhi, 9th September, 2015
Subject: No extension of date for filing of returns due by 30th September– reg.

Income-tax returns for Assessment Year 2015-16 for certain categories of assessees viz companies, and firms, individuals engaged in proprietary business/profession etc whose accounts are required to be audited, are to be filed by 30th September, 2015. The audit report is also required to be filed by the said date.

The Government has received representations from various stakeholders seeking extension of date for filing of returns and tax audit reports beyond 30th September 2015. The reasons cited are delay in notifying the returns and related delay in availability of forms on the e-filing website.

The matter has been considered. Income-tax returns forms 3,4,5,6 and 7 which are used by the above mentioned categories of assessees were notified for Assessment Year 2015-16 on 29.07.2015. The forms were e-enabled and were available on the e-filing website of the Department from 7th August 2015 giving enough time for compliance. The changes made to these forms are not extensive as compared to the earlier years. Further taxpayers entering into either international transactions or specified domestic transactions are required to file their returns by 30th November 2015 only.

After consideration of all facts, it has been decided that the last date for filing of returns due by 30th September 2015 will not be extended. Taxpayers are advised to file their returns well in time to avoid last minute rush.