Skip to content
CONVERSION OF PRIVATE LIMITED OR UNLISTED PUBLIC COMPANY INTO LLP AND ITS TAXABILITY UNDER INCOME TAX ACT, 1961
The Government of India has introduced various types of business structures for doing business. An entrepreneur can choose one from various business structures available according to their suitability. These are Proprietorship, Firm, AOP, One Person Company, Private Limited Companies, Public Limited Companies, Limited Liability Partnerships etc.
A Private Limited Company or Unlisted Public Companies are incorporated under provisions of the Companies Act, 1956 or 2013. They are governed by the provisions of Companies Act, 2013 (as amended from time to time). The new Companies Act, 2013 imposed various conditions and regulations on Private Companies also in comparison with the earlier 1956 act. So a Private Limited or Unlisted Public Company in which general public is not substantially interested have to comply with various rules and regulation as compared to other form of entities.
The Limited Liability Partnership was introduced in Indian business scenario to provide ease of doing business with limited liability benefits. The LLPs are governed by Limited Liability Partnership Act, 2008 and there is less compliance in compare to the companies.
Many Private Limited or Unlisted Public Companies are converting themselves into LLPs to reduce burden of compliance of the Companies Act, 2013.
Provisions of Section 47(xiiib)( effected from AY 2011-12) exempt the capital gain on transfer of assets of a private limited or unlisted public limited companies at the time of their conversion into LLPs.
The above exemption is available when conversion is held according to the provisions of Section 57 of the Limited Liability Partnership Act, 2008 and on fulfilments of following conditions under Income Tax Act, 1961;
1. All assets and liabilities of companies immediately before conversion should became assets and liabilities of LLPs at the time of conversion. 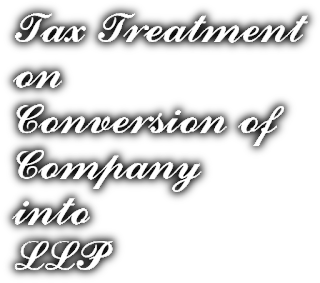 2. All shareholders of the company immediately before the conversion should become the partners of the LLP and their capital contribution and profit sharing ratio in the limited liability partnership are in the same proportion as their shareholding in the company on the date of conversion.

4. The aggregate of the profit sharing ratio of the shareholder of the predecessor company in the LLP shall not be less than 50 % immediately after conversion and at the time during the period of five years from the date of conversion.

5. The total sales, turnover or gross receipt in the business of the company in any of the three previous years proceeding the previous year in which the conversion takes place should not be more than Rs. 60.00 Lakhs.

6. No amount is paid either directly or indirectly to any partner out of balance of accumulated profit standing in the accounts of the company on the date of conversion for a period of three years from the date of conversion.
Note: If all of above conditions have been complied then the exemption from capital gain on conversion will be available to the company and with the shareholders of the company on transfer of their shares on becoming partner in LLP.
Note:  A private limited company or unlisted public limited company is required to comply with all above mentioned 6 conditions for getting exemption under section 47(xiiib) of the Income Tax Act, 1961 from capital gain on conversion.

CARRY FORWARD OF BUSINESS LOSS/DEPRECIATION; [Section 72A (6A)]
Provisions of Section 72A(6A) provides that in case of succession of business of a private limited company or unlisted public limited company by a Limited Liability Partnership complying with provisions of Section 47(xiiib) of the Income Tax Act, 1961 , the accumulate business loss and unabsorbed depreciation( including unadjusted capital expenditure on scientific research) of the predecessor company , shall be deemed to be business loss or depreciation of the successor Limited Liability partnership in the previous year in which the reorganisation or conversion taken place and all provisions of Set off or carry forward business loss and allowance of depreciation shall apply accordingly to the LLP.
Note: If LLP fails to comply with the provision of Section 47(xiiib) of the Income Tax Act, 1961 as mentioned above then all business losses and depreciation adjusted by the LLP shall be deemed to be its income in the year in which non compliance takes place.

IMPORTANT NOTES:
1. The aggregate amount of depreciation allowable to the Predecessor Company and successor LLP shall not exceed, in any previous year, the depreciation calculated at the prescribed rates as if the conversion had not taken place.