Skip to content
Notes:
(A) 194A
Limit is `10,000/- in respect of interest paid on Term Deposit with Bank & co. Op. Soc. Engaged in banking business & Deposit with post office under notified schemes.
All TD interest Aggregated.
Time for making payment of tax reckon from the date of cr. Of interest made constructively to the A/c of payee.
(B) 194BB

Section 194BB casts responsibility on the following persons to deduct tax at source –
(i) A bookmaker; or
(ii) A person to whom a license has been granted by the Government under any law for the time being in force –
(a) For horse racing in any race course; or
(b) For arranging for wagering or betting in any race course.
Winning by Jack pot incl. in 194BB
(C) 194C
A Includes Advertising Contract.
Covers Payment to Resident Contractors or Sub-Contractors.
If Contract for sale than no 194C ( pur. R/Mother than from customer and provide goods to customer.

Further, in respect of payment to transport contractors and sub-contractors engaged in the business of plying, leasing and hiring goods carriages, TDS provisions would not apply if they furnish their PAN to the deductor, if not furnished than 194C will apply.

In response to the representations received by CBDT, on the difficulties being faced in the matter of tax deduction at source on Gas Transportation Charges paid by the purchasers of Natural gas to the owners/sellers of gas, CBDT has, through this Circular, clarified that in case the Owner/Seller of the gas sells as well as transports the gas to the purchaser till the point of delivery, where the ownership of gas to the purchaser is simultaneously transferred, the manner of raising the sale bill (whether the transportation charges are embedded in the cost of gas or shown separately) does not alter the basic nature of such contract which remains essentially a ‘contract for sale’ and not a ‘works contract’ as envisaged in Section 194C. Therefore, in such circumstances, the provisions of Chapter XVIIB are not applicable on the component of Gas Transportation Charge the, use of different modes of transportation of gas by Owner/Seller will not alter the position.

However, transportation charges paid to a third party transporter of gas, either by the Owner/Seller of the gas or purchaser of the gas or any other person, shall continue to be governed by the appropriate provisions of the Act and tax shall be deductible at source on such payment to the third party at the applicable rates.

Such income may be by way of insurance commission or other remuneration in consideration for soliciting or procuring insurance business (including the business relating to the continuance, renewal or revival of policies of insurance).

The sum received under a life insurance policy which does not fulfil the conditions specified under section 10(10D) is taxable.
10(10D) = Premium always less than (Restricted Up to)-

Covers Guarantee amount paid or payable to a non-resident sports association or institution in relation to any game or sport played in India. However, games like crossword puzzles, horse races etc. taxable under section 115BB are not included herein.

“Commission or brokerage” includes any payment received or receivable, directly or indirectly, by a person acting on behalf of another person for services rendered, or for any services in the course of buying or selling of goods, or in relation to any transaction relating to any asset, valuable article or thing, other than securities.

No TDS, if payment by BSNL or MTNL to their call office (PCO) franchisees.

“Rent” means any payment, by whatever name called, under any lease, sub-lease, tenancy or any other agreement or arrangement for the use of (either separately or together) any –
(a) land; or

(b) Building (including factory building); or

(c) Land appurtenant to a building (including factory building); orachinery; or

Whether or not any or all of the above are owned by the payee.

Cooling charges no TDS. It preservation of good no right to use any demarcated space/place or M/C, & so not become a tenant. If arrangement basically contractual nature 194C applies. Circular no. 1/2014, dated 13.12014 No TDS on service tax component.

However, tax is not required to be deducted at source where the total amount of consideration For the transfer of immovable property is less than 50 lakh.
Means limit is per transaction/per immovable property. 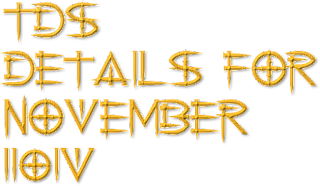 I. Such sum deducted under section 194-IA shall be paid to the credit of the Central Government within a period of seven days from the end of the month in which the deduction is made and shall be accompanied by a challan-cum-statement in Form No.26QB Rule 30].

II. The amount so deducted has to be deposited to the credit of the Central Government by electronic remittance within the above mentioned time limit, into RBI, SBI or any authorized bank [Rule 30].

III. Every person responsible for deduction of tax under section 194-IA shall also furnish to the DGIT (Systems) or any person authorized by him, a challan-cum-statement in Form No.26QB electronically within seven days from the end of the month in which the deduction is made [Rule 31A].

IV. Every person responsible for deduction of tax under section 194-IA shall furnish the

TDS certificate in Form No.16B to the payee within 15 days from the due date for

furnishing the challan-cum-statement in Form No.26QB under Rule 31A, after

(Systems) or the person authorized by him [Rule 31].

Not required to take TAN No.

The Central Government has, vide Notification No.21/2012 dated 13.6.2012, effective from 1st July, 2012, exempted certain software payments from the applicability of tax deduction under section 194J. Accordingly, where payment is made by the transferee for acquisition of software from a resident-transferor, the provisions of section 194J would not be attracted if

i. the software is acquired in a subsequent transfer without any modification by the transferor;

The person responsible for making the payment shall, at the time of credit of such payment to the account of the payee or at the time of payment thereof in cash or by the issue of cheque or draft or by any other mode, whichever is earlier, deduct tax at source on such interest component [referred to in section 10(23FC)] of income distributed to unit holders: @5%, in case of unit holders, being non-corporate non-residents or foreign companies; and @10%, in case of resident unit holders.

(L) 194LC Income by way of interest from Indian company

Interest paid by an Indian company or a business trust to a foreign company or a non-corporate non-resident in respect of borrowing made in foreign currency from sources outside India would be subject to tax at a concessional rate of 5% on gross interest (as against the rate of 20%of gross interest applicable in respect of other interest received by a non-corporate non-resident or foreign company from Government or an Indian concern on money borrowed or debt incurred by it in foreign currency).

The interest to the extent the same does not exceed the interest calculated at the rate approved by the Central Government, taking into consideration the terms of the loan or the bond and its repayment, will be subject to tax at a concessional rate of 5%.

Such interest paid by an Indian company or a business trust to a non-corporate non-resident or a foreign company would be subject to TDS@5% under section 194LC.

Further, levy of higher rate of TDS@20% under section 206AA in the absence of PAN would not be attracted in respect of payment of interest on long-term bonds, as referred to in section 194LC, to a non-corporate non-resident or to a foreign company.

(M) 194LD Interest on Government securities or rupee-denominated bonds of an Indian company payable to a Foreign Institutional Investor (FII) or a Qualified Foreign Investor (QFI)
Section 194LD provides that any income by way of interest payable during the period between 1.6.2013 and 31.5.2015 in respect of investment made by an FII or QFI in a rupee denominated bond of an Indian company or a Government security, shall be subject to tax deduction at source at a concessional rate of 5% (as against the rate of 20% of interest applicable in respect of other interest received by a QFI or FII).
(N) 195 Any other payment to NR