Skip to content
TODAY is Central Excise Day. Though the Board is busy with Budget and Parliament and the field is busy with collecting Revenue to be somewhere near the ever-elusive target, the Department is celebrating the DAY all over the country.
The Board has introduced this year a scheme of honouring the officers with certificates of merit on the Central Excise Day.
40 officers have been selected for the award of the certificates. Dr. Anil Nigam, AR at CESTAT, Bangalore is one of the awardees. Anil is a post graduate medical doctor turned revenue officer and is a keen cartoonist. DDT congratulates Dr. Nigam and the 39 other officers who have received this rare award in the first year of its inception. The awards are to be presented today at New Delhi. CBEC seems to be not very sure of the programme – no invitations have been sent out – at least we didn’t get one.
In the field, some Commissionerates are felicitating the assessees on the occasion of Central Excise Day.
SImpletaxindia.in wishes all Central Excise employees a happy day. 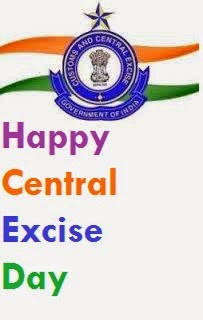 Income Tax – Is the leave encashment of a deceased employee taxable?
WHEN an employee dies, his spouse/legal heir gets certain terminal benefits like leave encashment, gratuity, etc,. Are these amounts taxable in the hands of the widow/legal heir?
CBDT was asked this question 25 years ago. In Circular No.573, dated 21-8-1990, Board stated, “Clarifications have been sought from the Central Board of Direct Taxes whether a lump sum payment made gratuitously or by way of compensation or otherwise, to the widow or other legal heirs of an employee, who dies while still in active service, is taxable as income under the Income-tax Act, 1961.”
Board examined the issue and clarified that any such lump sum payment will not be taxable as income under the Act.
But this was long ago – much legislation has passed through since then.
As per Section 56 (1) (vii) inserted by Finance Act 2009, where an individual or a Hindu undivided family receives, in any previous year, from any person or persons, any sum of money, without consideration, the aggregate value of which exceeds fifty thousand rupees, the whole of the aggregate value of such sum; will be chargeable to income-tax under the head “Income from other sources ”.
Then, is the gratuity paid to a widow of an employee covered under “Income from other sources”?
Opinion is divided.
In a note to the CBDT Chairman, the ASSOCHAM stated:
Death of an employee creates a lot of financial hardship to the legal heirs and it will be difficult for the legal heirs to calculate and pay taxes on the termination benefits received.
As the earlier CBDT circular has not been withdrawn, there is confusion as to whether these payments to legal heir are taxable income in their hands or not.
So the chamber has requested CBDT to issue instructions that ‘leave encashment’, ‘gratuity’ or other termination benefits received by the legal heir of deceased employee will not be taxable.
How are Budget Estimates Made?
THE Budget Estimates for 2014-15 were:
But how on Earth did the Finance Minister arrive at these figures?
The Tax Administration Reform Commission (TARC), asked the two Revenue Boards to explain the tax forecasting methods adopted by them. And both the Boards explained.
CBDT : There are two factors which form the basis for estimation of BE. First is the revenue collection during the past three years. Second is the corresponding GDP growth during these three years. Further, the GDP growth for the relevant year, i.e., the year for which the Budget Estimates are being made is also considered. For the purpose revenue estimation, the rate of growth of direct tax, separately for Corporate Income Tax (CIT) and Personal Income Tax (PIT) is taken for the past three years. Buoyancy is worked out for each of these three years separately for CIT and PIT,which is defined to be:
Buoyancy = Tax growth rate / GDP growth rate
The forecast of GDP growth rate for the relevant year for which the estimates are being made is provided by the Department of Economic Affairs (DEA). The average buoyancy for PIT and CIT is multiplied by GDP growth rate to arrive at the tax growth rate for the purpose of projecting revenue estimates. This is basically done for gross collections of tax. An estimate based on the previous year’s collections, which are major head and minor head wise, is also taken into account before arriving at the final estimate. The estimates made by the TPL division are subject to the final approvals of the same, taken by Budget division of the DEA.
The above method for revenue estimation is based on historical data and uses the GDP growth rate of the year in reference to arrive at the Budget Estimates. Over the past five years, the method has been tested against actual collection and in all years, the difference between actual collection and revised estimates has not been more than three per cent.
CBEC : the work relating to indirect tax revenue estimation/forecasting at aggregate level is carried out by the Tax Research Unit (TRU) for preparation of the budget estimates (BE) for indirect taxes. Before enumerating the exact methodology used for indirect tax revenue estimation it is necessary to understand the complexities involved in such estimation in the prevalent tax regime in India and why the standard text book economics and statistical methodology, based on pure economic criterion and a set of standardized assumption parameters, cannot solely be used for such estimation. Even though tax estimates based on buoyancy factor may turn out to be more realistic in the case of direct taxes than indirect taxes (sic). This is because direct taxes are progressive in nature in comparison to indirect taxes.
Indirect tax revenue at central level accrues from three taxes, namely, Customs, Central Excise and Service Tax, each of which is influenced by different factors which are described below:

a) Customs revenue in a particular year is a function of import and export volumes and the policy changes made in the fiscal policy. However, prediction of import and export volumes at the estimation stage is highly complex as these are a function of international prices of imported goods, monetary exchange rates, world economic and political scenario, FTAs entered into by various economic groups during the course of the year, trade restrictions imposed by importing/exporting countries, country specific tariff barriers imposed in terms of antidumping and safeguard duties and mid-year policy changes that may be implemented to address various concerns such as that of current account deficit. In recent times there have been huge volatility in the international prices of key commodities and also in exchange rates.
b) Central Excise duty is levied on manufacture. As of now about 60% of the total Central Excise revenue comes from specific rated commodities (like petroleum & products, tobacco product,sugar etc). Rest of the revenue comes from ad-valorem rates. A tax on manufacture cannot have a predictable co-relation to GDP numbers and tax buoyancy in the previous few years for the following reasons:

1) Manufacture does not have a predictable co-relation with growth in GDP. With increased FTA, there is likelihood of import substituting for manufacture. This is unlike consumption of goods and services, where there is predictability.
2) While a majority of excise revenue is a function of quantity of production, GDP numbers are in value terms. Therefore, revenue from these commodities cannot be based on GDP estimation. Further, production numbers of specific rated commodities cannot be predicted for the reason that this may vary for various reasons like ban imposed by the states on tobacco products or changes in consumption pattern.
3) While taxes imposed on income side have a predictable co-relation with the GDP, inflation and other economic indicators, the taxes on expenditure side are dependent on the consumption pattern, which in itself is a function of price elasticity of a commodity, the saving rate, etc.

c) Service Tax is a tax on consumption of services. Services constitute major portion of the GDP and consumption of services has a co-relation with GDP. Therefore fair estimation of service tax revenue is feasible by economic forecasting technique based on tax buoyancy/tax elasticity method with certain underlying assumptions. However, this estimation could be much more accurate if service sector is comprehensively taxed. Even with the introduction of the Negative List based tax regime a significant portion of the service sector (illustratively, a significant portion of public services/government services, health, education, public transport by road and rail, non-commercial construction, sports, entertainment and cultural services, financial services, agricultural sector related services and transport of goods) is outside the tax net.

The indirect tax revenue forecasting/estimation is done within the above stated constraints using the top down model. Broadly, the steps involved are,-

(i) The sectoral analysis of revenue estimates taking into account the past trends, growth prospect, the impact of policy level changes, sector analysis available in credible publication and the information provided by the respective ministries e.g., the growth projection in petroleum sector is provided by the Petroleum Planning and Analysis Cell (PPAC), Ministry of Petroleum and Natural Gas.
(ii) The import/export volume growth is estimated based on trends.
(iii) Feedback and revenue projection is taken into accounts from all zonal offices (CCs) in the 4th quarter.
(iv) Sectoral analysis of top 10 commodities/sectors w.r.t Customs, central excise and service tax.
(v) Based on the above inputs the numbers are consolidated and validated with nominal/Real GDP growth as reported by CSO, Ministry of Statistics, taking into accounts (sic) the likely outgo in refunds/Drawback, etc.

(vi) The estimates are finalized after due deliberation with the Budget and Economic Affairs Division taking into account the overall economic and fiscal scenario.

Basis for indirect tax revenue estimate for BE
How are Revenue Targets Distributed?
After Finalization of All India indirect tax head-wise targets, it is further allocated to the respective formations/zones of Customs, Central Excise and Service tax across the Country.
Moving targets, based on average of previous few years (sic) month-wise revenue collection trends, is communicated to all zonal offices at the beginning of the commencement of the financial year for monitoring the month wise revenue collections vis-à-vis moving targets.
At an all India level indirect tax revenue is monitored by TRU with regard to economic parameters viz., Quarterly release of GDP and monthly release of IIP, Imports, WPI inflation, etc.
All zonal heads do a detailed analysis of revenue viz. top assessees wise, sector-wise,additional revenue measures, etc. and report to the Board on a monthly basis. Further,conferences including video conferencing and meetings are held regularly at the level of the Board and above with field offices to ascertain the reasons for variations in revenue trends with regard to all India growth, on a regular basis.
The estimates of revenue are done regularly throughout the year. However, in the process of Budget Formulation, this is disclosed only once annually as BE/RE.
The Directorate of Data Management (DODM) and DG (System) are entrusted with the work to monitor and maintain the on line data warehouse (EDW/ACES/ICEGATE) on various technical and revenue matters that are being utilized to fulfil (sic) the need of Department/Ministry for analytical reports.
TRU has two Joint Secretaries, five Director/DS level officers and 13 Under Secretaries/Technical officers. Out of these, the statistical section consists of one Deputy Secretary and three officers from the Indian Statistical Services (ISS). The statistical section of TRU mainly looks after the work relating to forecasting, analysing and monitoring of revenue targets. Sector alanalysis and impact of policy changes is dealt with by respective commodity officers (Under Secretary/Technical Officers).
Buy Politicians
IN a Sting operation, the Daily Telegraph nailed two MPs in the famed British Parliament who were prepared to do work for a fictitious Chinese company for a fee of about 7000 dollars per day. And both of them were former Secretaries.
Source:TIOL