Skip to content
Verification of all lawyers soon – Law Minister

The Bar Council of India has introduced an exhaustive mechanism for ascertaining fake and non-practicing lawyers and with that purpose it has already framed the BCI certificate and Place of Practice (verification) Rules 2015, law minister Sadananda Gowda said on Thursday.

The minister said the BCI has already formed state level committees with the help of state bar councils to implement the verification drive and has set a deadline of seven months to complete the process. “The BCI has informed that within a period of 6-7 months, the entire verification process will be completed and fake lawyers will be identified,” Gowda said in response to a question in Lok Sabha.

The minister, however, clarified that since it has not yet been exactly verified how many lawyers are registered with a fake degree, their exact percentage cannot be given. The BCI chief had last month told a lawyers’ meet in Chennai that at least 30% of all lawyers in India are holding fake degrees.

The BCI rules have been framed in order “to check and stop the occurrence of the use of such fake degrees or to stop the non-practicing persons enrolled with the state Bar Councils from getting benefit or any welfare schemes.” The BCI has also proposed to set up its own Lawyers’ Academy on the lines of the Institute of Chartered Accountants of India to bring in professionalism and maintain ethical standards among practicing advocates.

The process of identifying fake lawyers began after the BCI received several complaints regarding fake degrees and unethical standards adopted by many of its practicing lawyers. During the recently-held advisory council meeting in the capital, chaired by the law minister, the Bar Council vice-chairman sought government’s financial assistance to set up such academies at the Centre and in states. 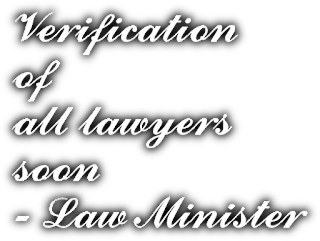 The government has asked the BCI to send its proposal and assured assistance. The Lawyers’ Academy will be responsible for conducting mid-career training of advocates and ensuring that certain professional and ethical standards are maintained.