Skip to content
MUMBAI, MAR 27, 2015:
Issue before the Bench is – Whether Sec 50C will have any application if WDV is computed in terms of Sec 43(6). And the verdict favours the assessee. 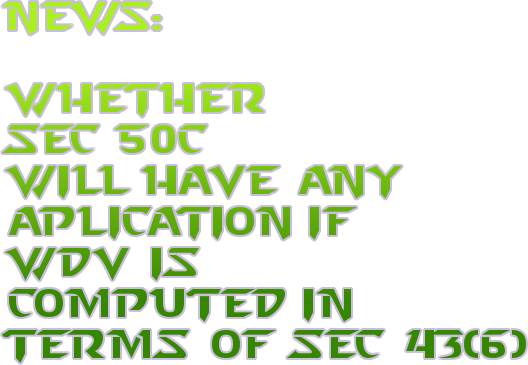 Facts of the case

The assessee concern is a cotton merchant, whose business is seasonal in nature. It had incurred certain direct nature expenditures, which were disallowed u/s 14A r/w rule 8D(2)(i), by the AO. The expenses incurred also includes interest on borrowings, in relation to income/s not forming part of the total income. AO found no purchases of yarn for the months of July to October, 2008, while that for the months of June and November, 2008 were also, at a little over 2% of the total purchases for the year, minimal. On the credit side, there was again no sale for the months of August to October, 2008, with minimal sales being observed for the months of June, July, November and December, 2008. There was, thus, correspondingly no business activity, so as to entail deployment of capital, for four to six months during the year. AO, accordingly, attributed 1/3rd of the total interest for the year towards investment in shares, yielding or liable to yield the tax-exempt dividend income. The balance interest claim was considered for disallowance under r. 8D(2)(ii) on a proportionate basis, i.e., in the ratio of the average investment in shares to the total assets as per the assessee’s balance sheet. On appeal, CIT(A) had observed that calculation by AO was based on a faulty assumption of the funds released on the liquidation of the inventories of cotton yarn during the lean season being utilized toward investment in tax exempt instruments. The CIT(A) therefore relying on the decision in the case of Godrej & Boyce Mfg. Co. Ltd. v. Dy. CIT 2010-TIOL-564-HC-MUM-IT, held for deletion of disallowance made u/s.14A with reference to rules 8D(2)(ii) and 8D(2)(iii).

During the course of assessment, AO observed that the assessee had sold a part of the assets forming part of the block of assets ‘Building’ u/s 50C, for Rs.1,50,000/-. The value adopted by the stamp value authority was at Rs.2,30,000/-. He, accordingly, recomputed the opening WDV of the relevant block of assets by reducing the said sum, as ‘moneys payable’, and allowed the depreciation for the current year accordingly, working the same to Rs.2,78,970/-, i.e., at Rs.5,700/- less than that claimed by the assessee. On appeal, the assessee found favour with the CIT(A) in-as-much as section 50C only applies for computing ‘capital gains’ arising to the assessee on the transfer of capital assets specified therein, so that the same would have no implication toward computing the WDV of the relevant block of assets.

Having heard the matter, the Tribunal held that,

++ we, accordingly, consider it a serious lapse on the part of the CIT(A) in not so directing the A.O. So much so, in our view, the parties themselves should have pointed out this during hearing, which exhibits or reflects smugness on the part of the assessee and a lack of preparation on the part of the Departmental Representative (DR). We direct accordingly, so that the disallowance of interest u/s.14A r/w Rule 8D(2)(ii) shall be with reference to the interest cost for the entire year, i.e., Rs.204.52 lacs, and not Rs.136.35 lacs. As regards our competence to so direct, we rather consider it our bound and duty to do so. The case law on the powers of the tribunal is legion, and for which we may, for ready reference, refer to the decisions inter alia in the case of Kapurchand Shrimal vs. CIT [1981] 131 ITR 451 (SC) and Ahmedabad Electricity Co. Ltd. vs. CIT [1993] 199 ITR 351 (Bom). We may though clarify that it is not be a case of enhancement, but only of an inter-clause adjustment of the clauses of rule 8D(2) under which the disallowance u/s. 14A is required to be more appropriately made in the facts and circumstances of the case; taking into account the position of law in the matter. Reference though may also be made to the decisions by the apex court inter alia in Martin Burn Ltd. vs. CIT [1993] 199 ITR 606 (SC); CIT vs. Assam Travels Shipping Service 2002-TIOL-702-SC-IT and CIT vs. S. Nelliappan [1967] 66 ITR 722 (SC). We decide accordingly;

++ the Revenue bases its claim on the decision by the special bench of the tribunal in the case of ITO vs. United Marine Academy 2011-TIOL-266-ITAT-MUM-SB. Even as noted by the CIT(A), the said decision, in ratio, only holds that section 50C shall apply equally in respect of depreciable assets; it being the assessee’s claim in that case that immovable property, the asset class specified in section 50C, would yet not apply in-as-much as the same is a depreciable asset being used for the purposes of its business by the assessee. We are in complete agreement with the CIT(A). The deeming of section 50C is for the limited purpose for computing the capital gains u/s.45 r/w s. 48 on the assets specified under the said section. The only purport of section 50C is the extent of the matter specified therein, providing (to that extent) an alternate basis to that specified u/s.48, for computing the capital gains chargeable u/s.45. The WDV would have to be necessarily computed in terms of section 43(6), and for which section 50C has no application. The decision in the case of United Marine Academy shall, therefore, have no application in the facts of the case, even as clarified by the CIT(A), whose decision is accordingly upheld. In fact, how we wonder the opening WDV could be altered without first changing the depreciation for the immediately preceding year and, concomitantly, the WDV at the close of that year. The Revenue’s case is wholly untenable in law. We decide accordingly, dismissing the relevant grounds. In the result, we dismiss the Revenue’s appeal and dispose the assessee’s appeal accordingly.